Leon's sister by birth, Maria is a strong young woman who carries on her fight against the empire even as she searches for her lost brother.

Maria is the main deuteragonist of Final Fantasy II. She is one of Firion's permanent allies and Leon's sister, but the two are separated at the beginning of the game.

Maria has pale skin, purple eyes, and long purple hair. She wears a halter top with the left side exposed, leggings, boots, and bracers on her wrists, all colored purple. A gold cup covers her left breast, and Maria wears a gold brooch on her neck. She also wears various gold bands on her left arm and a quiver of arrows attached to a belt around her waist. Her NES battle sprite shows her with red clothing and hair, while her map sprite in the NES version shows her with blonde hair. Maria wears a more simple outfit in her PS/GBA sprites, and her hair is a bright shade of purple. Her sprite matches Yoshitaka Amano's concept art in the PlayStation Portable version.

Maria is a kind young lady who often acts as the arbitrator between Firion and others, e.g., Leila, when she offers her aide to take Firion and his party to Deist. Maria eventually has an emotional breakdown and can't keep her composure as her loved ones and friends keep suffering and dying. When a townsman flirts with her and asks her to go out with him in Poft, she turns him down.

Maria's parents are killed during the Palamecian empire's strike against Fynn. While trying to flee from the Empire during their conquest of Fynn alongside Firion and her brother Leon, Maria slipped and fell when a steeple collapsed. A pursuing Imperial soldier nearly kills her until Leon and Firion held the soldier off long enough to get her and themselves to safety. Ultimately, she managed to escape from the city and regroup with Guy while observing their home's destruction with sadness. The princess of Altair, Hilda, takes Maria in. Firion asks if the three of them (Firion, Maria, and Guy) could join the rebel army. After Hilda refuses, Maria makes the statement they could not go home because the empire has taken over Fynn and that their parents have been killed. Hilda gives them the rebel password, Wild Rose, and allows them to stay in Altair. Throughout the game, Maria wants to defeat the empire and find her lost brother, Leon, who has been separated from her because of the empire's attack against Fynn.

Maria is later shocked to learn that one of the Emperor's servants, the Dark Knight, is Leon. When Leon attempts to crown himself Emperor after the original's first death, Maria accompanies Firion to confront him. The original Emperor returns from the dead, and Leon is forced to give up all dreams of ruling. After the Dark Emperor's return, Maria, Firion, Guy, and now Leon head to Pandaemonium, the fortress of the Lord of Hell that has come to surface from Hell thanks to the Dark Emperor's powers. When the party faces the Dark Emperor, he is finally defeated. Leon departs from the party, but Maria does not want to separate from him again and tries to stop him from leaving. Firion stops her, saying that when Leon is ready to come back, he will be welcome.

In the novelization, Final Fantasy II Muma no Meikyū, Firion and Maria become a romantic couple at the end.

Maria's starting equipment is a Bow and her clothes. Out of the three starting characters, Maria has the most Intelligence, making her suited to be made into a Black Mage by teaching her many offensive spells. She has the least Attack and HP among the three starting characters, and as her Stamina is lower than Firion's or Guy's, her HP will grow slower than theirs. On the upside, her Agility is the highest, so she will often get the first attack in battle early in the game. Her ultimate weapon in the Arcane Labyrinth is the Artemis Bow. Because the Key Terms that are optimal for Maria are received after retaking Castle Fynn, she has the option to obtain her ultimate weapon the earliest out of the three core party members.

It is up to the player to decide what kind of warrior Maria becomes. In the battle with the Emperor shown in the Soul of Rebirth cutscene before the final battle, Maria knows Holy, but as with any spell, the player may teach it to whomever they wish. Due to how stat growth works, Maria's lower physical stats can be easily made up with proper investment.

Maria has made appearances in the following games in the Final Fantasy series:

At some point in development, Maria had a different portrait sprite.

Maria's vocal sounds in the PlayStation remake Final Fantasy Origins were provided by Noriko Shitaya, who later provided the voice of Rydia in the Final Fantasy IV 3D remake, as well as Althea Sol Alfitaria in Final Fantasy Crystal Chronicles: The Crystal Bearers. 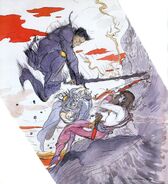 Amano artwork of Maria from the Final Fantasy II Muma no Meikyū.

Firion with Maria in Final Fantasy II Muma no Meikyū.

Amano artwork of Maria from the Final Fantasy II Muma no Meikyū. 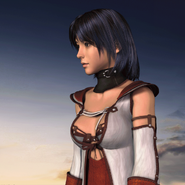 Maria surveys the destruction of Fynn in the opening from Origins.

Alternate artwork of Maria for Dawn of Souls.

[view · edit · purge]Maria is a female given name in many diverse cultures. It became popular with the spread of Christianity as a Latinized form of the Hebrew name of Jesus' mother Mary (Miriam in Hebrew). The meaning of the name is uncertain, but it may originally be an Egyptian name, probably derived from "mry" (beloved) or "mr" (love) ("eminent lady" or "beloved lady"), although it was used in Europe even before the establishment of Christianity as a female form of the Roman name Marius.

In Latin, maria can be roughly translated as "from the sea".