I never asked you to come along. Quit complaining.

Marcus to Steiner during the attempt to retrieve Supersoft.

Marcus is a temporary player character in Final Fantasy IX. He is a member of Tantalus and Blank's best friend, frequently referring to him as his brother and noting at one point, "There's only one man I call 'Bro'". He is also the lead actor in the play I Want to Be Your Canary and plays a character of the same name.

Marcus has a well-built physique and sports a more traditional pirate look. A light reddish bandana covers his entire head as well as the upper half of his face; however, his large nose, two sharp teeth protruding from his lower jaw, and pointed ears are visible. He wears a blue sleeveless shirt with a large collar that is torn at the bottom. A strip of white lace peeks out beneath a thick brown leather strap across his torso. He wears an equally wide brown leather belt with silver buckle over a pair of blue shorts with lacing on either side of his groin. He wears brown ankle boots with white fur cover, buckled wrist braces and a white band on his upper left arm. He has gray lines tattooed from his shoulders down to his knuckles. He carries a sword on his left hip.

Like his fellow members of Tantalus, Marcus is a skilled thief and actor. He is a kind-hearted, loyal friend who is always ready to help anyone in need. He proves to be a capable leader who is willing to set aside any differences to solve a problem.

Marcus is onboard the M.S. Prima Vista as it arrives in Alexandria. He helps Zidane fight Baku and acts out his part in the play I Want to be Your Canary while Zidane and Blank set out to kidnap Princess Garnet from Alexandria Castle. The play is interrupted when Zidane, Garnet, and an Alexandrian knight set on stopping the kidnapping, Steiner, stumble onto the stage. Garnet has studied the play, so she acts out the part of Princess Cornelia, the female lead, with Marcus.

Steiner, who was supposed to improvise the part of Prince Schneider, challenges Marcus, Zidane, Garnet, and Vivi, a black mage who also found his way onstage. The Prima Vista takes off, but Queen Brahne opens fire on it, forcing it to crashland in the Evil Forest. Marcus helps the survivors as Zidane quits Tantalus and absconds with Vivi and Steiner to save the missing princess from the monsters of the forest.

Marcus regroups with Cinna and Baku and the three escape Evil Forest and set out to find their way above the Mist. The three decide to rescue Blank who was petrified in the Evil Forest while trying to help Zidane. They need the Supersoft, an item that can cure petrification. Only Doctor Tot in Treno has it, and so Marcus and Cinna travel there. They meet Garnet and Steiner on the way in the South Gate, and although Steiner is unhappy to make their acquaintance, Garnet feels guilty Blank was petrified while trying to help their group and wants to help Marcus. Marcus accompanies Garnet and Steiner to Treno where they find Baku already there. Baku sets them up to rob Tot of his Supersoft, much to Steiner's frustration.

They get caught, but since Doctor Tot was Garnet's private tutor, he gives them the Supersoft. Marcus returns to Alexandria with it so he can access the Evil Forest. Garnet and Steiner accompany him, but upon arrival they are captured by Zorn and Thorn. Marcus and Steiner are held captive in a suspended cage in the dungeons of Alexandria Castle, but they escape by crashing the cage by rocking it. Marcus leaves Steiner to rescue Garnet, and makes his way to the Evil Forest to cure Blank. The two return to Alexandria just in time to save Zidane, Garnet, and Vivi from Zorn and Thorn and help them escape.

Marcus participates in the struggle against Queen Brahne, who has extracted Garnet's eidolons and now wants her executed. Marcus supports Blank, Steiner, General Beatrix, and the Burmecian Freya. Later, in Lindblum, Blank jokes that he and Marcus had to carry out the wounded bodies of the other three. Eventually, the rest of Tantalus arrive, including Ruby, Cinna, and Baku. After Brahne's death Ruby opens a mini theater in an Alexandrian alleyway, and Marcus, Blank, and Cinna help her. They take Vivi to the first show to use him as a decoy so that Ruby won't scold them for being late. Marcus and Blank also help patrol the streets of Alexandria at night.

After the Kuja attacks Alexandria with Bahamut, all of Tantalus except Ruby return to Lindblum to rebuild their headquarters that had been damaged in the attack by Atomos. Marcus briefly returns to Alexandria to help Zidane look for the missing Garnet after Hildagarde Fabool is rescued from Mount Gulug and returns to Cid's side, but subsequently returns to Lindblum where he remains. It is presumed Marcus ventures to Alexandria a year later to put on another play for Queen Garnet.

Marcus is a thief and thus has high Speed and physical attack power. Marcus shares the same character slots as Eiko, and any stats he has when he leaves the party are transferred to her, because Marcus's levels don't carry over. Therefore, the more the player levels up Marcus, the more powerful Eiko will be when she joins, regardless of what level she is. With this Marcus/Eiko stat bug it is possible to exploit the game to get maximum stats to Eiko in the stances where Marcus can be leveled. In his victory pose Marcus slashes the air in front of him with his sword in an X-shaped pattern and holds it at his side.

Marcus's main and only weapon of choice are swords, while his armor consist of hats, armlets, and light armor. Like Blank and Cinna, he can equip the otherwise female only Lamia's Tiara. Marcus's equipment option cannot be fully viewed unless the player hack all items into their inventory with a cheating device for the short duration of time that Marcus is in the player's party.

Marcus's battle commands consist of Attack, Steal, and Item. Since Marcus is only a temporary party member, he has no Trance bar nor any support abilities. He also cannot learn any new abilities found on equipment. He can steal, and any successful steals from Marcus contribute to the attack power of Zidane's Thievery ability, even before this skill is acquired. 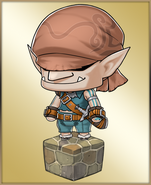 A member of the theater troupe Tantalus, Marcus's rough exterior belies the kind and resourceful young man he truly is.

Marcus is a playable character who could be initially recruited during the Challenge Event Ballad of Memories as a First Time Reward for completing the event's Alexandria Castle stage on Classic difficulty.

In the Dawn of Souls and subsequent remakes of the original Final Fantasy, Marcus is one of the automatic names the player can choose for the Monk job.

"Marcus" is one of the names that player can give a monster in Final Fantasy XIII-2.

Aside from the Tantalus meeting during Vivi's ending monologue, Marcus is the only member of the troupe not seen, and although the player is led to believe he is dressed in a black full body cloak, it is actually Zidane in disguise.

Concept artwork of the sword that is always at Marcus's side.

Marcus's name may be a reference to Marcus Brutus in Shakespeare's Julius Caesar. A fellow member of Tantalus, Cinna, is also a name of a character from the play.