Guest character
Marcie (Mummy Seeker in Japan), full designation "MUMMY RETRIEVAL & CONTAINMENT UNIT MRC-91" and shortened Marcy in Adventures of Mana, alternatively "Marshall" in Sword of Mana and the first mobile remake website, is a temporary party member in Final Fantasy Adventure. It is a robot built by Dr. Bowow to hunt for relics inside the Dime Tower. If Sumo tries to leave the tower, Marcie will stay behind to continue the research.

Marcie was left by Dr. Bowow in the Dime Tower and remained there when it sank in the Crystal Desert. Sumo meets Marcie who introduces itself to him and tells him that its searching for relics. Dr. Bowow left it here, and waited for fifty years, but was forgotten inside the tower. Marcie offers to help Sumo, and joins him.

When they reach top of the tower, they face off against Garuda. After its defeat, the tower starts to tremble. Marcie tells Sumo that the tower lost its balance and they must hurry off the tower before it falls. They take the pathway heading west while the path before their exit falls below. Marcie convinces Sumo to let him throw him to safety, lying saying he will jump afterward. Marcie throws Sumo on the ledge, he urges Marcie to jump. It replies that Sumo has to save the world and he's the only hope left. Marcie admits he cannot jump and says he must stay with the tower because it was created to work in the tower and it's there that it will sleep. The tower starts to fall with Marcie still on the tower while Sumo can't do nothing more then watch it falling down.

Marcie shoots lasers at enemies during battle and will restore Sumo's MP to full if asked.

Marcy was a unit and its ability is Containment Boost. Marcy could not be promoted. 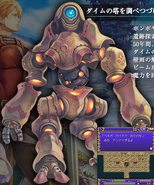 Artwork from the first mobile remake.

[view · edit · purge]A mummy is a deceased human or animal whose skin and organs have been preserved by either intentional or incidental exposure to chemicals, extreme cold (ice mummies), very low humidity, or lack of air when bodies are submerged in bogs, so that the recovered body will not decay further if kept in cool and dry conditions.