Cid Pollendina: Oh, shut up and help me remodel the Maranda Coast page!
Please expand this article into a full one. The following tasks need to be completed:This request can be discussed on the associated discussion page. Remove this notice upon completion.

Maranda Coast is a location in Final Fantasy Brave Exvius. It comprises the coast land to the southeastern side of Dirnado, and is connected to the Ballen Passage that goes all they way to Industrial City Dilmagia. In the north, it is connected to Dilburg Mine.

While on their seatrip from Kolobos Isle to Industrial City Dilmagia, the party's ship is attacked by the esper Leviathan, causing it to shipwreck, and the trio ends up washed up to the shores of Maranda Coast. Rain, passed out, dreams about his encounter with a crystal from his childhood but wakes up, only to see Lasswell also unconscious. After waking him up, the two knights hear Fina's scream and hurry to her side, as she is being attacked by monsters.

During the fight, Fina's head starts to hurt. Ater defeating the monsters, Rain asks how she is feeling, but Lasswell notices something isn't right. Effectively, Fina laughs and tells Rain it has been a while, and ask whether he will choose Aldore or Hess but Rain has no idea what she is talking about. Fina then returns to her normal self and passes out, to which Lasswell wonders if her memory is returning. After she wakes up, they go to Ballen Passage Entrance and continue their journey.

Defeat a black shark with a limit burst 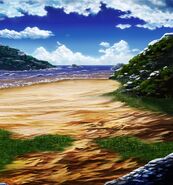