Maranda used to be the most beautiful town on this continent...then the Empire came along. Now look at it!

Maranda is a small town in the southwest on the southern continent in Final Fantasy VI. Lola lives here.

Maranda was attacked by the Empire led by General Celes, decimating the town. Most of the men were drafted to serve in the Imperial army, including Lola's boyfriend, who ended up in Mobliz. He was mortally wounded when he attempted to flee the army during the siege of Doma.

The Blackjack crashes near Maranda after being damaged by the espers that emerge from the Sealed Gate. It remains there for some time while Setzer and Cid repair it.

Sometime after the cataclysm, Cyan passed through the town, curious as to what had become of Lola and her boyfriend. Her boyfriend had died during Mobliz's destruction, but Lola continues to send him letters, never receiving a reply. This struck a chord with Cyan, who went to Mt. Zozo and began sending Lola letters addressed from her boyfriend, pretending he was alive and helping rebuild Mobliz.

After raising the Falcon, the Returners follow one of Cyan's carrier pigeons to Lola's home, now adorned with hand-made silk flowers Cyan has sent her. Lola asks to send a reply in a form of a letter attached to a carrier pigeon. The pigeon flies towards the direction of Zozo, with the party following it to locate Cyan.

If the party returns to speak with Lola later, she admits she knew the replies were not from her boyfriend, but is thankful to whoever wrote them for giving her hope and wishes she could meet the person who wrote to her, feeling that they must have had a similar experience to hers. If Cyan is in the party, he stops the party from revealing the truth and tells Lola that she must look forward to the future that comes with the new dawn. Moved by his words, Lola agrees to move onward to the future and thanks Cyan for his kindness.

The inn and equipment shops in Maranda.

Maranda is one of the smallest towns in Final Fantasy VI. The city is walled off with a staircase leading into town near the Inn. The Weapon and Armor shops are at least partially built into the city's defensive wall. In the center of town, Imperial soldiers hold dog-fighting contests with betting as their entertainment, and nearby another soldier is chasing a dancing girl. Lola lives in a house on the east side of town.

There are two items to find in Maranda: a crate near the entrance of town contains a Holy Water, and a crate outside of Lola's house has a Remedy.

When taking Lola's letter to attach to a carrier pigeon, the player temporarily receives the key item Lola's Letter. It is lost when attached to the pigeon; after the cutscene where the pigeon flies to Zozo, it is removed from the inventory.

In the World of Balance, the Blackjack crashes near Maranda and the party must set out to Vector. A chocobo stable is in the woods nearby, or the player can go to Maranda to resupply after the trek through the Cave to the Sealed Gate.

After the Imperial banquet, if the player returns to the Blackjack, they can view an optional scene of Cid offering to help Setzer repair the airship, and Setzer alludes to his friend Darill.

While sending letters for the wounded soldier in Mobliz, the player can fly the Blackjack to Maranda and speak to Lola to see her reactions to his letters. This is optional and the quest can be completed without going to see Lola.

In the World of Ruin, shortly after retrieving the Falcon, a cutscene will play and the airship will automatically fly to Maranda to prompt the player to begin the quest to find and re-recruit Cyan. After speaking to Lola in her house, the party learns of the letters, and can read the letter on the table. Lola will ask the party to attach her reply to a carrier pigeon. The player needs to agree and inspect a pigeon outside the house to view a cutscene of it flying to Zozo, where the player can continue the search for Cyan within Mt. Zozo.

After Cyan has been re-recruited, if the player makes a party including him and returns to Lola, a brief cutscene will occur of her and Cyan reconciling.

In the Advance and mobile/Steam releases, if the player kills ten Cactuars in the desert, the Gigantuar appears as a fixed encounter when stepping on a specific tile at the desert on the world map. Defeating it earns the Cactuar magicite.

The party battling a Cactuar and Slag Worm outside of Maranda.

The desert outside Maranda is home to Cactuars and Slagworms, which makes it one of the best places to level up if the player isn't strong enough to handle the enemies in the dinosaur forest yet. Both enemies give large amounts of gil, Cactuars reward 10 Magic Points, and Slagworms reward 5 Magic Points and a lot of EXP.

Cactuars have extremely high evasion and defenses, so attacks that ignore these stats are best: Tools, Blitzes, Bushido, Throw, and Ultima all work to this end. Strago's 1000 Needles Lore, and Relm's 1,000 Needles via Sketching the Cactuar, can be used to defeat it. Umaro can also easily defeat it. The player can also equip a Sniper Eye to ensure attacks won't miss and arm a character with a weapon that ignores defense, like the Ultima Weapon.

The Slagworm is vulnerable to many status ailments, including Stop, which can incapacitate it while the player attacks—ice-elemental abilities are best. Alternatively, it is also vulnerable to Instant Death, so Death, Banish, and Chainsaw can instantly kill it. Air Anchor on the other hand is preferable since the Slagworm will instantly die when it takes a turn after it is hit by Air Anchor.

In the Advance and mobile/Steam versions, the Imperial trooper chasing the dancing girl outside of Lola's house notes her name to be "Aisha". The literal translation of Aisha is something along the lines of "wheel of suffering". This may be poking fun at the NPCs never ceasing their circular movement.

According to Final Fantasy VI Settei Shiryō-hen, the Gestahlian Empire conquered the southern continent eighteen years prior to the start of the game. This seemingly contradicts the in-game statements that Celes headed the attack on Maranda that decimated the town—the date given in the guidebook as the conquest of the continent is the year Celes was born. It is possible that the Empire initially conquered Maranda eighteen years ago and the attack Celes led on the town was to put down an uprising of some sort; on the other hand, the guidebook is known to contradict the canon of the game in other places, and the date given for the conquest may simply be an error. 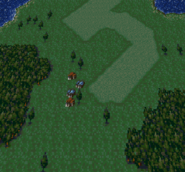 Maranda on the World of Balance map (SNES). 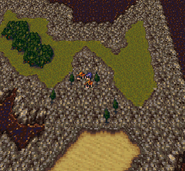 Maranda on the World of Ruin map (SNES).

Maranda on the World of Balance map (GBA).

Maranda on the World of Balance map (2014 mobile/Steam).