Nether Mantra deals great damage to those of little Faith. Believe and you shall be saved!

Marach is a tanned-skin young man with short black hair and brown eyes.

He's a hot head and stubborn person, but truly loves his sister.

Shortly after Marach was born, Grand Duke Barrington came to his village to take Marach and his sister Rapha to make use of their special powers. When the village leaders refused to cooperate, Barrington had the village razed and kidnapped the children. Marach grew up thinking Barrington has saved him and Rapha and felt indebted, joining the Khamja, an elite assassination team, in the Fifty Years' War. During Marach's service under Barrington he was unaware of his master's cruel treatment of Rapha, which culminated in Barrington raping her. Rapha tried to convince Marach of what was going on, but he refused to believe it.

Marach comes across Isilud Tengille who had kidnapped Alma Beoulve. He captures Isilud and takes him and his prisoner to Barrington's stronghold of Riovanes Castle. Barrington sends word to Isilud's father Folmarv Tengille, leader of the Church of Glabados Knights Templar, indicating he wants to meet with Folmarv, and assigns Marach to deal with Alma's brother Ramza. Marach informs Ramza Alma is being held at Riovanes Castle and sets a trap for him at a town along the road. Rapha is supposed to help him, but as Ramza approaches, Rapha tries to convince Marach of the truth.

Marach refuses to listen, and when Ramza arrives, Rapha defects. Marach and the Riovanes soldiers attack both Ramza and Rapha, but Ramza drives them off. Marach returns to Riovanes Castle, and is there when Folmarv arrives. Marach brings Isilud out and watches Folmarv strike him across the face. Word arrives Ramza is approaching the castle, and Barrington sends Marach to deal with him. At the castle entrance, Marach engages Ramza and Rapha in battle. Rapha realizes she cannot convince Marach of the truth and teleports away. Marach follows suit.

Battle on the Roof[]

Rapha confronts Barrington atop the castle roof. Marach listens in unseen as Rapha levies her accusations against Barrington and aims her weapon at him. Fear prevents her from firing, and Barrington gloats at what appears to be an easy victory, revealing what he did to her. Marach makes his presence known and demands to know if what he has just heard is true. Barrington pulls a gun and fires at Rapha, but Marach knocks her out of the way, taking the bullet himself.

Barrington is thrown off the roof by the Ultima Demon Lettie disguised as a human girl, and a battle erupts between Ramza's forces and those of Marquis Elmdore. Ramza is victorious, and following the battle, Rapha mourns the loss of her brother. The Scorpio auracite reacts, but rather than turning Marach into a Lucavi, it revives him. After searching the castle for Alma, the group realizes she is in the hands of Folmarv, and Marach joins Ramza on his quest to rescue her.

Marach's default and exclusive job is the Netherseer, is a magickal job that uses powerful but random strikes to take down enemies, and its damage depends upon both the caster's and target's Faith: the lower, the more effective (the inverse of regular magicks). However, the statuses Faith and Atheist still work normally (Faith raises damage while Atheist nullifies). Nether Mantra abilities hit random tiles for a random number of times within the casting zone, and are thus best cast against groups of enemies who are close together.

Marach is fought twice in the story; the first time at the Walled City of Yardrow and again at Riovanes Castle. At Yardrow, he is level 23 with 69 Bravery and 31 Faith, and comes equipped with the Gokuu Pole, Headband, a random armor and an accessory. He comes with the Nether Mantra command, as well as a random second action command and random Squire abilities. In the second battle with him, he is level 24 but retains everything from in the previous battle.

When fought in the eleventh Rendezvous battle: All-Star Melee, he is two levels higher than the highest level deployed unit. He starts with 69 Bravery and 31 Faith in his default job Netherseer, equipped with the Eight-Fluted Pole, Thief's Cap, Black Garb, and Japa Mala. He has access to the Nether Mantra and Item commands, as well as the abilities Soulbind, Swiftness, and Manafont.

When fought in the fourteenth Rendezvous battle: Brave Story, Marach is level 99 and starts with 69 Bravery and 31 Faith. He comes equipped with the Eight-Fluted Pole, Thief's Cap, Black Garb, and Featherweave Cloak, and has access to the Nether Mantra and Items command, as well as to the abilities Swiftness, Nature's Wrath, and Manafont. 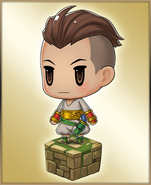 Marach is a playable character who could be initially recruited during the Challenge Event Family Secrets as a First Time Reward for completing the event's Monastery Vaults - First Level stage on Classic difficulty.

[view · edit · purge]The name Malak comes from the Arabic word for angel (from the same root as Malachi).