Detects by Sight
Detects by Smell
List of Manticore Enemies
Manticore is a genus of enemies in Final Fantasy XI.

A bizarre looking creature, the manticore was once thought to be a demonic branch of beastmen. However, further study proves them to be a naturally occurring species in Vana'diel. Most manticore vary in size, though they are all larger than adventurers. Their striking red color along with their gigantic fangs and spiked tails makes them an imposing target to go after. Armed with various breath attacks, brute strength, and even an ability to lower MP, they are well equipped for combat. Interestingly, all manticore have wings, but it seems they are incapable of flight due to their size. It is believed these wings act as cooling units, since the majority of manticore are found in desert regions such as Altepa and Teriggan. Several notorious manticore are known to drop valuable weapons and armor, and even a rare type of hide.

Many a crafter has come to value the materials from manticores. Their hair is used in the synthesis of ninjitsu tools, and their famously large canines are a common ingredient in bonecrafting. Manticore hides are valuable to leathercrafters due to their wide application in the crafting of armor, from the Ogre set to the Bison set to the Wise set. 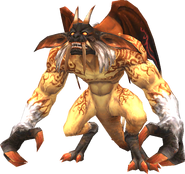 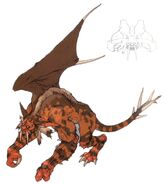 Concept art for the Manticore.
Add a photo to this gallery

[view · edit · purge]The manticore is a Persian legendary creature similar to the Egyptian sphinx. It has the body of a lion, the head of a human, and the tail of a scorpion. The name means "man eater."