Mansion is a field map in Final Fantasy VII, visited twice. It is a building located in Nibelheim with story importance. It is first visited in a flashback during "The Tragedy of Five Years Ago", and can later be returned to by the party during "Unnatural Hometown" as an optional dungeon. On return, it is here that the party can recruit Vincent and obtain various items.

Upon entering the room on the right as seen from the entrance hall, the player can pick up the Silver M-phone from a chest in the small room. It is a weapon for Cait Sith.

The back rooms on the first floor can be entered from three different doors. On the left, on the right, and straight ahead of the main floor.

This section contains numerous rooms on the east and west, linked via a corridor. This room can be entered by accessed from the corridor entered straight ahead in the entrance and then turning left, or entering the door on the left in the entrance, and following the corridor.

In the top-right is a chest with the Twin Viper, weapon for Yuffie.

This room in the top-left holds a piano that functions the same as Tifa's piano, although certain keys are broken. Pressing the [OK] button to the right of the piano, in the bottom-right corner of the room, reveals a message. 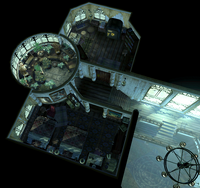 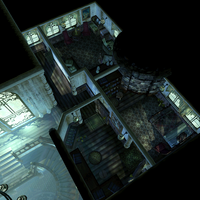 There are two sets of rooms on the second floor. They can be entered from the top of the staircase in the foyer.

In the left room is a chest containing the Enemy Launcher. If the player presses the action button once more on the opened chest, a message is revealed.

In the room on the right, at the top of the screen, is a safe. Opening the safe initiates a fight between the player's party and Lost Number boss. Defeating Lost Number wins the Cosmo Memory, Red XIII's level 4 Limit Break. A Red Materia on the floor is Odin, and the key in the safe is the Key to the Basement.

On the eastern side of the second floor, in the right side of the area, the room at the top of the screen holds a Magic Source. A third of the way down the adjacent corridor, a creak sound will play when the player moves over it. Pressing the action button at this point will reveal a message.

The other room has an outline of a rectangle on the stone wall. Running through this takes the player to the spiral staircase.

The spiral staircase is closed off and is accessed from the rooms on the right of the second floor. The only thing that the player can do in the staircase is battle random encounters.

Upwards is a room with coffins that is accessed with the Key to the Basement, obtained from the safe. Straight in-front of the player is a library and laboratory.

During the flashback, the player will find Sephiroth here after returning from Mt. Nibel.

The laboratory links the study to the basement caves. Returning here on Disc 2 with Cloud as party leader will initiate a flashback to Zack and Cloud's escape from the manor and their journey to Midgar.

The first time the player comes to the facility, a scene triggers with Sephiroth in the bookshelf passage.

Interacting with the containers triggers texts.

In versions released after the original Japanese release, returning here after Cloud rejoins as leader in Part 2, will trigger a scene depicting specimens escaping and traveling to Midgar.

The bookshelf passage is a short corridor lined with bookshelves joining the laboratory with the study. When entering the laboratory for the first time with Cloud as leader prior to Meteorfall, the party automatically goes to the bookshelf corridor where a scene with Sephiroth occurs. He drops the Destruct Materia.

The study area of the library contains various reports can be read around the room. The books are open and of a light shade.

Open book just above report no. 1:

To the left of the chair:

During "The Tragedy of Five Years Ago", the Mansion is visited briefly as Cloud chases after Sephiroth. No enemies are encountered, and aside from a few interactions, the area has little of value.

In "Unnatural Hometown" and thereafter, the Mansion is a purely optional location and now has random encounters.

The safe sidequest can be done anytime after Cloud and the party first enter Nibelheim.

After entering the Shinra Mansion, the player can enter the bottom-left room and read the notes of the floor to discover clues to the safe combination.

After reading this, the game says there is another letter and gives the option to read or leave it.

The first clue is found on the lid of the chest found in the left section of the second floor. This reveals (Right 36).

The second clue is found next to the piano found in the top-left room of the first floor. This reveals (Left 10).

The third clue is found two-thirds of the way down the corridor on the right-portion of the second floor where a creak in the floor is. This reveals (Right 59).

The fourth clue is the one in invisible ink, (Right 97).

With this, the player can go onto the left portion of the second floor to find the safe in the top room. Twenty seconds is given to enter the four codes. The player has to turn right, and left to the numbers without overshooting it, pressing the action button on each number. Failing to do so means the player will have to try again.

The code to enter is:

Once the combination is put into the safe on the second floor, the player fights Lost Number. Upon winning, the player receives Cosmo Memory, Red XIII's level 4 Limit Break. The Odin Materia appears on the floor afterward along with the Key to the Basement in the safe.

Vincent can be recruited after the player has the Key to the Basement from the Safe sidequest. The player must go through the spiral staircase to the basement and enter the room with the coffins. Pressing the action button on the closed coffin in the center of the room will reveal an alive Vincent.

After a number of discussions, the player can choose from "Good night" and "Who are you?". Asking "Who are you?" will allow the player to name Vincent. Then when the player leaves and exits, approaching the spiral staircase Vincent stops the party and decides to go with them. The player is then given the option to reconfigure the party.

The player can learn ???? on the Enemy Skill Materia from the Jersey fought in the room with the safe and the room opposite it. It will eventually use ???? if the player leaves it alone and does not attack it.

No random encounters occur during "The Tragedy of Five Years Ago".