Detects by Sound
List of Mandragora Enemies
Mandragora, sometimes called "Onion Children", seem to originate from the island of Elshimo. These little bipedal monsters are now common throughout the Mindartia continent. Coming in both white and black forms, these small creatures are known to provoke mischief among the five primary races.

Through the process of evolution, this sentient form of plant life has developed its own independent culture; the society boasts clothing, homes, and a form of extrasensory communication. While seemingly cute and harmless in appearance, the Mandragoras' sense of values differs greatly from that of people or beastmen. These differences often cause friction between the species. The Mandragora receive nourishment from the sun via photosynthesis, which occurs in the leaves that grow on their heads. Merchants treasure these rare leaves, which can be sold for use in medicines and perfumes.

It is speculated that as Mandragoras mature, they collectively bloom at regular intervals. During this time the leaves that adorn a Mandragora's head spring into flower. While the actual time frame between these blooming cycles is difficult to determine, the last noted occurrence of it was said to take place during the Crystal War.

Mandragora has a Triple Triad card.

The korrigan subspecies of the mandragora.

The lycopodium subspecies of the mandragora found in Wings of the Goddess areas.

The pachypodium subspecies of the mandragora.

The adenium subspecies of the mandragora. 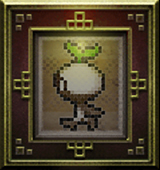 A mandragora depicted in the "Sproutling Board" furnishing.

One of the Mandragora species in Final Fantasy XI is Alraune. [view · edit · purge]Alraune is the German word for mandrake and is also the title of a German novel published in 1911 about the daughter, named Alraune, of a prostitute that has an overactive sex drive and no concept of love. This is based on legends which state that witches who make love to the mandrake root produce offspring that have no soul or feelings of love.