The more damage it takes, the sooner it uses Earthquake. Its Ochu Dance inflicts darkness, silence, confusion, and slow. Also beware of poison. Vulnerable to fire.

Mandragora is an enemy in Final Fantasy X found at the cavern in Mt. Gagazet and in the ruins of Zanarkand (not in the dome). Its physical attack may inflict Poison, and it uses a powerful magic attack called Earthquake after being targeted 10 times, hitting all members of the current battle party, though it proves ineffective against Valefor. When below 33% HP, it can use Ochu Dance, which inflicts Darkness, Silence, Confuse, and Slow.

It drops weapons with Strength +5%, Magic +5% and Poisontouch, and armors with different status wards.

Attack may cause Poison. 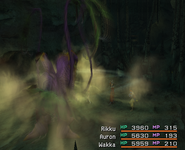 Ochu Dance.
Add a photo to this gallery

Retrieved from "https://finalfantasy.fandom.com/wiki/Mandragora_(Final_Fantasy_X)?oldid=3368060"
Community content is available under CC-BY-SA unless otherwise noted.