Cid Pollendina: Oh, shut up and help me remodel the Manderville Gold Saucer page!
Please expand this article into a full one. The following tasks need to be completed:

An amusement park located at Southern Thanalan, founded and managed by the master goldsmith Godbert Manderville. It has a Cactuar known as "Senor Sabotender" as the official mascot of the park. Players can participate in different minigames such as the Triple Triad, Chocobo Racing, and many more to obtain a special currency known as MGP (Manderville Gold Saucer Points), which can be used to buy exclusive rewards in the park.

GATEs are events similar on FATEs that occur at the 15 or 45 minutes past every hour Eorzea time.

Manderville Gold Saucer Points (MGP) obtained from playing minigames can be traded for many type of rewards including Setzer Gabbiani's costume, a Bunny outfit, and NPC casual wear.

The Manderville Gold Saucer debuted in the interim patch of Before the Fall. Triple Triad, Chocobo Racing, Cactpot Lottery, GATEs, and the first mini-games debuted here.

The launch of Heavensward added twenty new cards to Triple Triad, as well as NPCs to play in expansion areas.

Patch 3.1 As Goes Light, So Goes Darkness added Lord of Verminion, as well as two new mini-games based on the older Gathering system from Version 1.0.

Chocobo Racing was expanded by introducing the Chocobo Challenges, along with additional abilities and items to use during races.

The Triple Triad Battlehall was added to permit cross-server Triple Triad matches across the same data center. Similarly, Lord of Verminion matches can be queued through the Duty Finder.

"Four-sided Circle", a violin arrangement of the "Gold Saucer" theme from Final Fantasy VII plays in the park. It was composed by Masayoshi Soken.

The original version of "Shuffle or Boogie" from Final Fantasy VIII plays while playing Triple Triad.

Square Enix's Eorzea Cafe served a dish called "Parfait of Gold Saucer" with a description that translates to: The Gold Saucer—a place for all to indulge in transient dreams. This parfait embodies the glamor of it all. Enjoy the many flavors provided by the fruits and sauces! 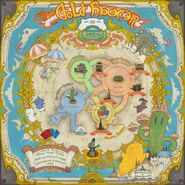 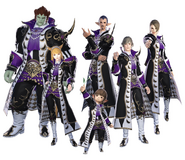 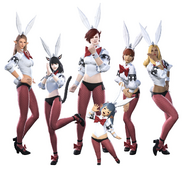 Bunny costumes.
Add a photo to this gallery