Doubles max MP of one character.

Mana Tablet doubles the max MP of a single character, and can be dropped from Abaddon, stolen from Behemoth and Jumbo Flan and bribed from Chimera. Mana Tablet x60 are awarded for creating the Ironclad in the Monster Arena. Two can be used to customize MP Stroll on an armor.

Mana Tablet return and function the same way as in the previous game. Mana Tablets can be stolen from Gucumatz (Oversoul) and Precepts Guard.

A vigorous tonic that increases the drinker's magical attack power. Due to its extreme potency, only salve-makers with advanced knowledge can stomach it and gain its benefits. Said to have been developed by salve-makers to augment their own magical capabilities on the battlefield, its lack of drinkability has kept it from reaching wide popularity. 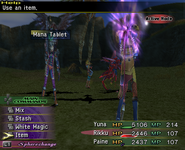 [view · edit · purge]Mana is an indigenous Pacific Islander concept of an impersonal force (false ego) or quality that resides in people, animals, and inanimate objects.