Man Eater is a support ability in Final Fantasy IX for physical attackers, allowing them to increase the power of their Attack toward human enemies. It costs 2 Magic Stones to equip.

Killer abilities in Final Fantasy IX are reminiscent of weapons in the Nintendo-era Final Fantasy games that dealt more damage to specific types of enemies.

Man Eater is learned from numerous equipment pieces for variable amounts of AP: Bandana, Coronet, Mythril Gloves, and Coral Ring. Amarant learns it the quickest at 10 AP, where Zidane requires the most at 25 AP.

Coral Ring is the earliest source for all, obtained when Freya Crescent wins the Festival of the Hunt. It can later be made in synthesis shops as well.

Bandana for Zidane and Amarant is first bought from Treno when Princess Garnet and Captain Steiner visit there; Zidane's party can soon also buy it from Cleyra and other shops.

Mythril Gloves for Steiner and Freya are first bought in Burmecia and Summit Station. A pair is also found in Cleyra's Trunk.

Coronet for Zidane and Amarant is bought from Daguerreo and Bran Bal, and found in Terra.

With Man Eater active, using Attack deals 150% normal damage to human enemies. It does not stack with other Killer abilities if the enemy belongs to more than one category, but does stack with MP Attack and Elem-Atk gear, and the attack can still critical. If the attacker also has Healer (only possible with Amarant), the amount healed with Attack is increased against human enemies; however, party members are not considered "human" class so one cannot do increased damage or healing with Healer against one's allies. Man Eater affects any use of Attack command against humans: via Attack, Charge!, or Counter. It does not affect damage from any other move besides the basic Attack command. 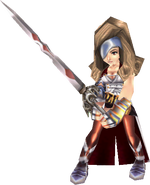 Human enemies are more common as bosses; the only randomly encountered humans are the Alexandrian soldiers in story segments, the mirrored party members in Oeilvert, and Iron Men in the final dungeon, who also belong to the demon class like other enemies in that place. Therefore, Man eater is not an ability that helps to be equipped at all times, but at only 2 Magic Stones, it is also cheap.