Dagger that is especially effective against humanoids.

Man-Eater (マンイーター, Man Ītā?), also known as Maneater, is a recurring weapon in the Final Fantasy series. It is often a dagger that deals double damage to humanoid targets, and is usually obtained late in the game.

The Man-Eater is a high-ranked knife found in the Interdimensional Rift, and stolen from Alchymia. It has an Attack of 86 and Hit Rate of 89, and also grants +2 Strength, Speed, Stamina, and Magic. Even if not mentioned in the item menu description, it does double damage to human enemies when used with the Jump command. It can be equipped by Dancers and Freelancers and uses spear damage formula.

The Man-Eater is a high-ranked dagger used by anyone who can equip a dagger (except Mog). It deals double damage to human targets. It has an attack power of 146, +10 Magic Evade, and enables the Runic command. It can be found in Darill's Tomb, and bought in Jidoor and Thamasa in the World of Ruin for 11,000 gil.

If the character equipped with it becomes confused, they will deal double damage to party members. It is a good idea to use the Man-Eater while equipped with either a Ribbon or a Peace Ring.

Man-Eater is affected by the Capture glitch.

Concept artwork for the Man-Eater was created, but the weapon does not appear in the game. Man Eater is instead a support ability.

The Maneater is a powerful axe that has increased damage output at low TP, making it quite popular among Warriors. It can only be obtained through the Like the Wind and Totentanz ENM events.

Maneater is a Strength-raising artifact that increases Strength by 1.

Maneater is a level 30 dagger that provides +36 Attack and is bought for 264 gil.

The Man-Eater is a level 36 dagger that provides +26 Attack and fills the player's EX bar by +15% at the start of a battle. It can be obtained by trading 10,200 gil, a Triton's Dagger, and a Black Tiger Fang.

For accurate strikes against priority targets.

The Man Eater appears as a sword within the Forsaken Dungeon. It provides 76 Weapon Atk, 8 Durability, -10 Defense, +10 Magic Atk, -2 Speed, and -2 Consumption Rate.

Manslaughter appears as the ultimate dagger for Hawkeye for the Light Dark path of the Rogue class. It is a pointed silvery undulated dagger with a coarsely refined rounded hand guard with jagged spikes protruding at its arch, wood carved finger grip handle and another smaller undulated blade at its hilt. As its name implies, it is not just regulated for wild beasts and monsters, but encounters with one's own kin. It is designed in mind with many daft features; its undulating pattern is said to be made especially to help cut through flesh easier, and its crude but tough hand guard is also possible for use as a knuckle. 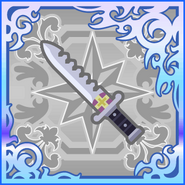 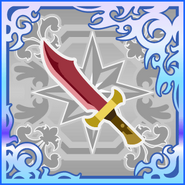 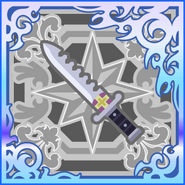 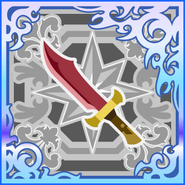 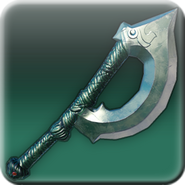 [view · edit · purge]Man-eater is a colloquial term for an animal that preys upon humans. This does not include scavenging.