In Final Fantasy XI the Mamool Ja are a group of beastmen introduced in Empire of Aht Urhgan. They are notable as the only beastman race capable of using Blue Magic.

Their name translated from their native tongue as "Brethren of the Shining Scale", the Mamool Ja hold dominion over the Mamool Ja Savagelands under a republic ruled over by four overlords from each class: The maroon Mamool Ja who specialize in combat or Blue Magic and the blue Mamool Ja who use magic. There are also Mamool Ja Knight that make use of Wivres as mounts. They also have a naming system where each individual Mamool Ja's name ends with "Ja", "Ja Ja" in the case of those born with multiple heads.

While the Mamool Ja have been paying tribute to the Empire of Aht Urhgan since ages past, a splinter group called the Mamool Ja Savages have been regularly laying siege to the city of Al Zahbi since the emergence of their leader or "The Autarch": The two-headed Gulool Ja Ja.

Mamool Ja come equipped with a job, and will readily use the spells granted them (if any) in addition to their special attacks.

Mamool Ja originate from the New World, a continent across the sea to the west that is mostly unexplored by Eorzeans. The ones who come to Eorzea primarily do so as mercenaries. Two-headed Mamool Ja are born as a result of marriage between individuals in two tribes, a rare occurence amongst Mamool Ja. They are known as "blessed siblings" and groomed as warlords.

The Mamool Ja are a recurring enemy found primarily in La Noscea around Bronze Lake. They also appear in Before the Fall at the hard version of the Wanderer's Palace. In the storyline, a band of Mamool Ja mercenaries known as the Silverscales led by their leader Manxome Molaa Ja Ja have taken over the Wanderer's Palace to have their stronghold while butchering the resident Tonberries. The Adventurer manages to drive out the Silverscales while defeating Molaa Ja Ja as the two-headed Mamool Ja is finished off by the Tonberries.

4.5 sees the appearance of members of Boneewa Tribe, the most powerful mages among the Mamool Ja. 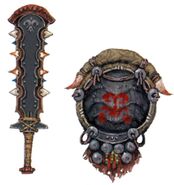 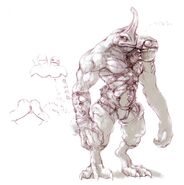