Mammon (The 4 Heroes of Light)

Boss
Mammon is a minor antagonist in Final Fantasy: The 4 Heroes of Light.

Before the events of the game, Mammon arrived in the Sun Temple and caused a great snowstorm to spread cold throughout the region. The everlasting cold caused residents of Invidia to become cold and heartless, and only Rekoteh seem to be unaffected by it. After Rolan was corrupted by Lucifer, Mammon continued to use her snowstorm, rendering Invidia to its current condition during the game's present timeline.

After being sent fifteen years into the past, the party goes to Invidia and meets up with a younger Rekoteh. After the party obtains the Dragon's Mark in the Invidia Underground, Rekoteh explains to the party that Mammon caused Invidia to be the frozen town it is now. The party travels to the Sun Temple and fight Mammon, defeating her and lifting the curse on Invidia. Later, Mammon is revived within the Star Chamber, but she is defeated once more.

Mammon is fought twice in the game, once in the Sun Temple, and another time in the Star Chamber. Mammon's special attack, Diamond Dust, is the signature attack of the recurring summon, Shiva.

In Bravely Default, Mammon appears as a level 25 Nemesis in Norende. Similar to the other bosses from Final Fantasy: The 4 Heroes of Light, a remixed version of the battle theme from her original game plays during the battle against her.

In Bravely Second: End Layer, Mammon appears as an optional boss fought near Florem as part of the Seven Sins sidequest and represents the sin of Greed. It gives Yōkai access to the Diabolism spells Greed and Blizzaja. 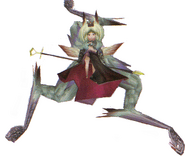