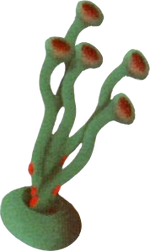 This malboro tendril was dried in the sun, removing much of its scent. Used as a material in basket weaving and other handcrafts.

Malboro Vine (モルボルの触手, Moruboru no Shokushu?), also called M-Tentacle or Malboro Tentacle, is a recurring item in the Final Fantasy series. It is, as its name implies, typically acquired from the Malboro enemy and has varying uses, mostly associated with Poison.

Uses "Bio3" on all opponents

The M-Tentacles is a battle item, which deals Poison-elemental damage to all enemies with 48% chance of inflicting target with the Poison status, in essence being the item version of the spell Bio3. It can be dropped from the Malboro or Sneaky Step, or by stolen from the Malboro.

This section about an item in Before Crisis -Final Fantasy VII- is empty or needs to be expanded. You can help the Final Fantasy Wiki by expanding it.

Malboro Vines are dropped from members of the Morbol family, and are used by Alchemists to synthesize goods such as Hi-Potions. A variant is the Ameretat Vine, dropped from the eponymous relatives in the Near East; these vines are used in production of special high-level swords exclusive to Blue Mages.

The Malboro Vine is a piece of loot needed to unlock the Flametongue at the bazaar, along with a value pack of Hi-Potions and Smelling Salts. They are dropped by Malboros and Great Malboros.

Malboro Vine is a high-ranked Braided Twine that can be Scavenged from Inscrutable Bones on Muruc Cahuac Skysea and Tswarra, Isle of the Lost or bought at the Sky Saloon in Chapter 6 for 570 gil (5% discount). It can be used to craft Runeblade, Earthsabre, Elfin Bow, and Pyroblade.

A fibrous vine dripping with poison. It is valued as a monster ward, and could fetch a high price.

Malboro Vine is a treasure that can be used as an Elemancy ingredient to add Killcast to a spell. It drops from Malboro Sprout and Malboro Brat (5%) and sells for 2,250 gil.

Malboro Tentacle is a quest item for Randolph obtained from a Malbodoom and traded for a Dragoon Lance.

Malboro Vine is a loot material, obtained by completing the missions "Pirate Attack," "Wanted: Floraxion," and "Open Wide." It is required to make the Malbow, Green Beret, and Nail Bow.

[view · edit · purge]"Malboro" may derive from the Japanese onomatopoeia boro, the sound of an upset stomach. The word mal means "something bad" or "illness". The name could also be a reference to Marlboro Cigarettes, since the creatures often spew horrid fumes from their mouths.