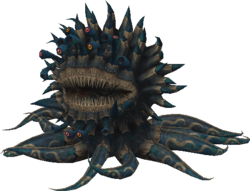 Malboro Menace (モルボルワースト, Moruboru Wāsuto?, lit. Molbor Worst) is a recurring enemy in the series introduced in Final Fantasy X. It also appears in many remakes where the Malboros had previously appeared. It is oftentimes the upgraded version of the Great Malboro.

Malboro Menace is an enemy fought in the Game Boy Advance and later releases at Arubboth. It fights much like the Great Malboro, relying on physical attacks that inflict multiple statuses to one character and traveling in groups. It is weak to Fire-elemental and Ice-elemental attacks, and absorbs all other elements except Lightning, and can drop the Yoichi Bow.

Malboro Menace fought at the Depths. It is a more powerful version of the Great Malboro, but is not the strongest of the Malboro-family. In addition to using Bile and Bad Breath, Malboro Menace has the Doom spell. It is valuable for its rare item drops, the Soma Drop, Ribbon, and Elixir. Malboro Menace is weak to Fire-elemental attacks.

Malboro Menace is a boss fought in the Game Boy Advance and later releases at Dragons' Den, appearing first alone, then two more appear when it is defeated, followed by four. It is the most powerful of the Malboro-family, having access to the Bad Breath, Tentacle, Diabolic Whistle, and Blaster skills, inflicting a wide range of status effects to the party constantly. It is weak to Fire-elemental attacks.

Malboro Menace is an optional boss fought at the Monster Arena after catching at least one of each fiend at Kilika. It is the most powerful Malboro, boasting high stats and having access to more powerful version of the Malboro skillset, including Putrid Breath, Mega Gastric Juice, Gastric Juice Blast, and Chow Time. Malboro Menace will always start the battle by ambushing the party and opening with Putrid Breath.

The Malboro Menace is a L-Sized Mirage that appears as an optional boss, alongside the Flan Princess, in The Windswept Mire. After defeating it, the player obtains a Malboro Menace Memento.

This gallery is incomplete and requires Final Fantasy IV: The After Years (3D) added. You can help the Final Fantasy Wiki by uploading images.
Enemies
Community content is available under CC-BY-SA unless otherwise noted.
Advertisement