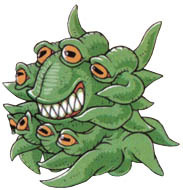 Disturbing creature that gives off quite an odor.

The notorious Malboro is a monster in Final Fantasy Tactics Advance. It is a large green monster with many eyes, tentacles, and a horrible odor. Its Stench commands cause status ailments. It has no reaction or support commands. It has a more dangerous relative with more HP, the Big Malboro.

As with all Tactics Advance enemies, Malboros leave behind remains when defeated. Malboro's defeated form is unique, as it still resembles its full form, albeit a bit shrunk.

Malboros are capturable along with their bigger cousins, Big Malboros. Their abilities can be used together if a player has both monsters captured. The Malboro's other ability, Goo, immobilizes a target only in melee range, which mostly defeats the purpose of immobilization. Malboro abilities don't deal damage, but do provide a supply of status effects, especially with Bad Breath. Unusually, Malboros and Big Malboros only eat Ethers and Elixirs, and will not accept Curealls.

Malboro's signature Bad Breath ability inflicts myriads of critical status effects, cutting down even the toughest fighters with ease. The only true way to avoid this is to wear equipment that nullify status effects. Bad Breath is learnable as Blue Magic, but unless properly equipped, the Blue Mage will get pelted with status effects. It is important to not accidentally cast Astra or Mog Shield on the Blue Mage, as then Bad Breath will not work.

Retrieved from "https://finalfantasy.fandom.com/wiki/Malboro_(Tactics_Advance)?oldid=3262518"
Community content is available under CC-BY-SA unless otherwise noted.