The Malboro of Final Fantasy X is a fiend encountered more easily in the northwest of the grassland area in the Calm Lands, and occasionally in the rooms (not hallways) in the Cavern of the Stolen Fayth. It is a large plant that overwhelms the party with status ailments.

Malboro might drop armor with wards against many different status ailments. It will also drop weapons with Sleeptouch, Silencetouch, Poisontouch, or Darktouch.

As aeons are immune to status ailments, the player can summon them against the Malboro. Ifrit can be a good choice as Malboros are weak to Fire. 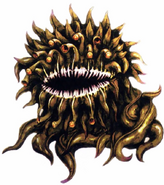 Retrieved from "https://finalfantasy.fandom.com/wiki/Malboro_(Final_Fantasy_X)?oldid=3367644"
Community content is available under CC-BY-SA unless otherwise noted.