Despite being ill, the cat frequently ventures through the Mt. Nibel, and Tifa, concerned over her well-being, constantly chases after her despite the cat's frequent disregard for her calls to wait.

In Two Pasts novel, Mal wandered off to Mt. Nibel. When Cloud found her, he was too shy to bring her back to Tifa, so his mother did.

In Before Crisis, while chasing after the mischievous cat, Tifa met the Player Turk, who was making their way to the Nibel Reactor after being blown off course during their parachute drop. Following their investigation of the mako reactor, the Turk took Tifa and her cat back to Nibelheim via the Shinra ropeway and, following the ropeway's destruction, on foot.

Following Tifa to the Nibel Reactor during the Nibelheim Incident, the cat led Zangan to her unconscious body at the base of the stairs. The cat wanders the remnants of the town as the Player Turk frets over the moral implications of covering up of the incident. 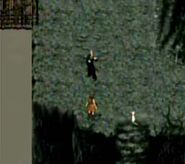 A picture of the cat. 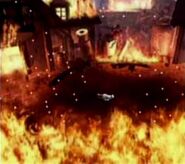 The cat surrounded by flames in the Nibelheim Incident.