Baldur Katana
Makoto Obinata is a non-playable character from Final Fantasy XIV. She is a member of the Sekiseigumi peacekeeping group in Kugane[1]. Makoto and her older brother, Ugetsu, were born into a notable samurai family from Bukyo[2].

Momozigo introduced Makoto to the Warrior Light and explained that the lady had come calling for Master Musosai. The Warrior met with and informed her of the events that led to his death, including that they were his last pupil. Makoto introduced herself as a member of the Sekiseigumi, the peacekeeping force of Kugane. She traveled with the Warrior to the Silver Bazaar to pay her respects before Musosai's grave, where she revealed her reason for coming to Eorzea was to enlist Musosai's aid in combating insurgents led by his wayward pupil Ugetsu. Since he was no longer of the living, she deemed she had to return empty-handed.

Some time later, she sent a letter addressed to the Warrior to the hands of Momozigo, which revealed that the Sekiseigumi were fighting a losing battle against Ugetsu. She begged for the Warrior to assist her and her comrades. She was encountered caught in an insurgent ambush which she overcame with the Warrior's timely aid, though her comrade did not share the same luck. The insurgents had caught wind of the Sekiseigumi's movements.

Makoto later introduced the Warrior to the lieutenant of the Sekiseigumi, Shiden, and their captain, Kongo, who did not trust the Warrior. When the latter supposedly died via seppuku due to his failure to combat the insurgents, Makoto requested the Warrior help with patrolling duties at the pier to keep an eye out for any suspicious activity, for the Tairo, one of the nation's most powerful men, was due to pay a visit.

The Warrior found a bloodstained charm, which Makoto recognized as having belonged to Kongo. Suspecting his death was due to the insurgents, they rushed off to the Tharvaranian Consultate to find Shiden and had him boost security around the Tairo. Redirected to the Sanjo Hanamachi owing to the personal nature of the Tairo's visit, they caught Shiden with his katana drawn, and Makoto realized he was a traitor. She and the Warrior crossed blades with Shiden and his fellow turncoats. Captain Kongo, long believed to be dead, showed up alive and well with Sekiseigumi still loyal to the cause and helped the duo turn the tables.

Having ensured the safety of the Tairo and the purging of insurgents within the Sekiseigumi, Makoto and the Warrior regrouped with Kongo to discuss their further strategy against Ugetsu, for little was known of his whereabouts. A search of Shiden's quarters revealed that the insurgent base could be in Yanxia, and Makoto and the Warrior headed there while Kongo remained at the Sekiseigumi headquarters. One of Ugetsu's henchmen eventually revealed that Ugetsu was on his way to Kugane.

Makoto and the Warrior raced back, only to witness Kongo die in a brief duel against Ugetsu. With his last breath, Kongo named Makoto as the successor of the Sekiseigumi. Her authority was immediately undermined as Ugetsu revealed that she was his younger sister, Kagetsu. He proclaimed to change Hingashi with flames and blood, inviting those present to join his cause—Makoto and the Warrior included. After he proposed a battle between his men and the Sekiseigumi on the Isle of Bekko to settle things once and for all, he departed, taunting Makoto that she may want for allies.

With her identity exposed, Makoto's attempts at rallying her men were met with a lukewarm response and she confessed her past to the Warrior. Some time after Musosai had taken Ugetsu as his pupil, the person who returned was a changed man filled with anger and despair at the bakufu, and desired to topple them. He had assassinated Hingan dignitaries, costing brother and sister the lives of their entire family. Kagetsu had escaped and journeyed to Kugane, where she had taken on the name of "Makoto" and has lived for the sake of punishing her brother. While his cause grew, hers weakened, on account of their shared bloodline. She admitted that with Kongo gone, she had nothing left to depend on save her own conviction and the Warrior's.

The situation deteriorated further when Makoto discovered that members of the Sekiseigumi had been deserting following the revelation that she is Kagetsu's sister, and the Warrior, Musosai's pupil. The Warrior persuaded some of the Sekiseigumi to hear what she had to say. Their opinion of the Warrior improved after learning Kogarashi and Musosai were one and the same, and the timely arrival of Momozigo made the Sekiseigumi members see the errors of their thinking, rallying behind Makoto once more.

On the Isle of Bekko, the Sekiseigumi clashed with the insurgents. After a fierce duel, the Warrior defeated Ugetsu, and the leaderless insurgents turned tail and fled. Makoto, while initially hesitant, delivered the killing blow to Ugetsu, ending a threat to the realm. With her appointment as the Sekiseigumi captain confirmed, she offered her gratitude to the Warrior and pledged to live up to Kongo's faith in her.

Makoto is a female midlander Hyur with black hair and blue eyes. She wears the red and white Sekiseigumi uniform. 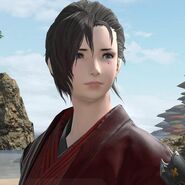