You average SOLDIER members are mako-infused humans. You're enhanced, but still human. But then, what are those things? Their mako energy levels are exponentially higher than yours.

Makonoids are mutants held in containment units inside of the Nibel Reactor. Cloud Strife, Zack Fair, and Sephiroth encounter the containment units while investigating the mako reactor during what would later become known as the Nibelheim Incident. They discover Professor Hojo's experiments have transformed humans into makonoids. The machines the makonoids are inside of are designed to condense mako energy into materia, but Hojo has modified them to instead expose a human to the condensed mako energy, mutating them. It is also implied that the makonoids being created via modified containment units was the cause of the Nibel Reactor's malfunction, via broken purification tanks. One makonoid bursts out of the machine, ultimately dying in agony.

Sephiroth begins to believe he was created by the same method as the makonoids, leaving him unsettled. Sephiroth begins reading books in the Shinra Mansion basement, triggering his insanity. He declares he is going to see "Mother", destroys Nibelheim, and heads for the Nibel Reactor where Jenova is being held.

Makonoids are encountered in Crisis Core -Final Fantasy VII- as part of the Genesis army. The Crisis Core Complete Guide[1] reveals they were created by the research of Genesis's group in the Banora Underground. Graffiti found in the holding cells tells who they were before they were transformed. 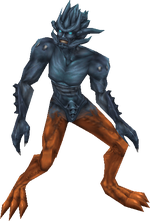 Makonoids appear in battle during the Hojo's Monsters mission in Crisis Core -Final Fantasy VII-. Another of Hojo's experiments, another makonoid, titled Experiment No. 121, is fought in the mission of the same name. In battle, makonoids are strong, fast and unpredictable.

The most common makonoid enemies are the results of Project G. They are fought in the Banora Underground at Lake Oblivion and in various missions.

The enemies with G in the named after the Ninth Circle of Hell in Dante's Inferno. This refers to Genesis's betrayals. 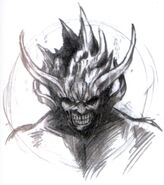 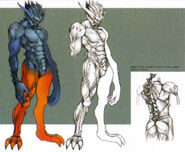 Concept art of a Makonoid for Crisis Core.