Makenshi, referred to by Kuroki Kaze as "White Cloud" (true name Shiroi Kumo), is one of the main characters in Final Fantasy: Unlimited. Makenshi is initially played as a villain working for Earl Tyrant and his Lords.

An Unlimited from the long-destroyed realm of Misteria, Makenshi used the linear motion of his Maken ("Magic Sword") as a channel of the power of Mist to summon his Sword Dragons. Makenshi is voiced by J. Shanon Weaver in the English version and Akira Ishida in the Japanese version.

Makenshi's breath emits mist so he wears a mask to filter it, thus removing the chance that the Mist would activate under normal conditions.

He has many similarities to Kaze in terms of personality. They are both reckless and brutal but Makenshi is the more disciplined of the two. He rarely has many words to spare for anyone other than Kaze, and is often seen in the Earl's throne room, sitting in the arms of a statue above the Earl's throne.

This section about a character in Final Fantasy: Unlimited is empty or needs to be expanded. You can help the Final Fantasy Wiki by expanding it.

Makenshi was a prince during his childhood and learned his swordsmanship from his older brother and only friend at the time, Madoushi. As Makenshi wanted to learn the sword to catch up to his brother, he excelled him and drove a wedge between them. When Chaos attacked his world, Makenshi retreated to Winderia where he rescued an injured Aura, whose beauty he appreciated, and met Kaze.

Aiding Kaze, Makenshi turned into a Sword-Dragon and battled Chaos Gun-Dragon over Sadoshima on Earth. In the end, Makenshi placed Kaze in sleep and forwarded his services to Earl Tyrant to learn more about Chaos. He sought this knowledge so he could find out Chaos's weaknesses to restore the world to a place of peace, unmarred by Chaos's tyranny.

Makenshi loyalties are left ambiguous as while he at first serves the Earl he is revealed to have been faking his loyalty to discover Chaos's true goals, plans and weaknesses.

He first encounters Kaze after their last battle together, while Kaze is resting with the Comodeen. At first Makenshi is hesitant to attack, but when he sees Kaze has lost his memories they fight without remorse. Makenshi's next major encounter with Kaze is when he is fighting Fungus in Fungus's home world.

When Kaze is losing hope for victory, Makenshi appears with Crux. While Crux is spreading the mold through Fungus's world, and thus poisoning him, Makenshi confronts Kaze and spurs him to fight once more.

After the Comodeen's submarine, Jane, is trapped in the Ocean Puzzle, Oscha revives his brother and rival Madoushi, and sets up a fight between the two. Madoushi attacks Jane, causing Makenshi to appear and face off against his sibling. In the end, it takes the combined efforts of Kaze and Makenshi to put an end to Madoushi, allowing his soul to rest peacefully.

Makenshi puts an end to Pist and his Ocean Puzzle, by converting the former to Mist, due to his liquid nature, and using him to summon a dragon to destroy the latter. He attempts to convince the Comodeen to flee from Chaos, no longer believing he can be stopped, but is unsuccessful.

In the climax, his true loyalties are revealed when he converts himself to mist, and summons a dragon made from his mist to bind Chaos while Kaze tries to destroy him, mirroring their roles in their first attempt to destroy Chaos.

Makenshi and Crux appear on Earth, joining the party and helps Lisa protect the twins from Soljashy, and Kaze. Before the events of Final Fantasy Unlimited After 2, Makenshi obtains the mist power of his brother. Crux gains the ability to transform into the Cross Sword, which Makenshi uses in combination with his own blade.

During the final fight, Makenshi reveals his goal is not order like the others', but rather a world where people can express themselves freely without fear of Chaos. He accompanies Kaze into the gateway to finish the fight with Chaos once and for all.

Makenshi's sword, Maken, possesses great power and can deflect the projectile of not only the Comodeen, but also Kaze's hand gun. Makenshi controls the sword with telekinesis, as seen when he used his ability to destroy Chaos's machine designed to merge Omega and the Hayakawa twins into himself.

He uses the sword to slice his mist bottles and summon his mist dragons, which appear similar in power to Kaze's summons. 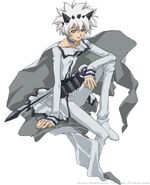 [view · edit · purge]Makenshi translates to "Demon/Dark Swordsman" or "Dark Fencer." Kenshi meaning swordsman/fencer and Ma meaning "supernatural with a dark connotation" it can also at times be conceptualized as "cursed" or "demonic" (in a more Japanese sense).

In regards to the job translated to Mystic Knight which came later, the appropriate word would be Mahoukenshi (魔法剣士).

Mahou translates to magic, but specifically the Western idea of magic such as wizards and the like, Mahoukenshi thus meaning Magic Swordsman/Mystic Swordsman/Magic Fencer. This plays on his use of sword and magic. His sword is called the Maken (meaning "magic/demon sword"), so his name can also be interpreted as "user of Maken". His sword's name contrasts with the Magun (魔銃, Majū?), meaning "magic/demon gun".