This knife gives the wielder a good chance of blocking attacks, making it useful for both offense and defense.

The Main Gauche (マインゴーシュ, Main Gōshu?), also known as Main-Gauche, Parrying Daggers, or Guardian, is a recurring dagger in the Final Fantasy series. It is often one of the weaker, but still powerful weapons for the Thief class, and gives a boost to evade and/or speed.

A knife that raises evasion.

The Main Gauche provides +10 Evade, 32 Attack, and 70 Accuracy. It can be found in the Dreadnought.

The Main Gauche provides 35 Attack and +3 Agility, and can be bought in Amur for 7,000 gil or found in Saronia Castle. It can be used by the Freelancer, Onion Knight, Warrior, Thief, Red Mage, Bard, Ninja, and Dark Knight classes.

Knife that sometimes blocks enemy attacks. Can be used with Spellblade.

The Main Gauche is a dagger found in Karnak Castle and Moore, or dropped from Mindflayer. It has a 25% chance of parrying an enemy's attack, and provides 33 Attack and 36 Accuracy.

The Main Gauche (originally called Guardian) is equippable by Locke and is found in Mt. Kolts. It has an attack power of 59, boosts Speed by 4, Evade by 10. It can be used with the Runic command.

The Main Gauche is the Vigil Weapon corresponding to the Dancer's Mythic Weapon (Terpsichore), found within Nyzul Isle. It can be used to obtain the Weapon skill Pyrrhic Kleos.

The Main Gauche is a dagger with 38 Attack Power, 34 Evade and 1.97s charge and 1.2s action time, making it one of the slower daggers. It is sold in Jahara and Rabanastre for a cost of 3,500 gil. Equipping it requires obtaining the Daggers 3 License for 30 LP.

In the Zodiac versions, it provides 46 Attack, 50 Evade, 21 CT, 5% combo rate, and requires the Daggers 3 license for 35 LP. It can be bought in Jahara and Mt Bur-Omisace for 4,230 gil, found as a treasure in the Giza Plains - The Rains (Tracks of the Beast) and Zertinan Caverns (Halls of Ardent Darkness), or poached from Lesser Chimera (3% chance). It is also a treasure in Trial Mode Stage 39 (with Diamond Armlet). It can be equipped by the Shikari class. It requires the Daggers 3 license for 35 LP.

The Main Gauche has low power, but a Weapon Evasion of 40%. It can be bought for 3,000 gil after Chapter 3 or found with the Treasure Hunter ability as a rare treasure at Grogh Heights.

Parrying Daggers are daggers for Rem Tokimiya. They provide 14 Attack Power and can be bought from Roshana for 2400 gil.

The Main Gauche is an artifact that increases the Defense of the character by 2.

Main Gauche is a level 35 Dagger that provides +30 Attack and is bought for 362 gil.

This section about equipment in Final Fantasy Crystal Chronicles: My Life as a Darklord is empty or needs to be expanded. You can help the Final Fantasy Wiki by expanding it.

The Main Gauche has an attack of 8 and magic attack of 4 and can inflict paralysis upon attacking. It can only be bought from the multiplayer shop in Spelvia for 6,180 pts.

Main Gauche is a knife that provides 15 Attack Power and 20 Hit Rate. It can be bought for 550 gil from Braska, Mt. Verde, Verde, and Yggdrasil and found from Crystal Temple and Castle Liene. It can be equipped by Jobless, Thief, Red Mage, Black Mage, Summoner, Bard, Memorist, Ranger, Dancer, Ninja, and Magus jobs.

The Main Gauche is a level 15 dagger that increases Attack by 12 and fills the EX Gauge by 15% at the start of a battle.

The Main Gauche is Locke's default weapon. Equipping it offers no advantages or disadvantages.

Main Gauche (VI) is a 5★ weapon for Locke with a base CP of 15. It teaches him the affinity ability Treasure Hunter's Talent, which raises the BRV potency and improves the buff status of Thief's Gloves when using the command ability Sneak Slash or Sneak Slash+. It has a maximum level of 30.

Main Gauche (XII) is an EX 5★ weapon for Penelo with a base CP of 70. It teaches her the affinity ability Dancer's Dream, which grants the EX ability Intercession. It has a maximum level of 35 and with each limit break, it upgrades the EX ability performance. An evolved version, called Main Gauche+ also exists with stronger capabilities and stats.

This dagger gifts its wielder with a catlike evasion that really annoys enemies.

Main Gauche grants +1 to Attack. It can be equipped by Thief, Dancer, Locke, and Rinoa.

A dagger with a small shield attached, making it a viable offense and defense.

A dagger with a large hilt that can be used to catch incoming enemy attacks and then parry them. It was mainly used for battle, but was also once a popular decorative piece adorned with family crests, elaborate patterns, and jewels all placed on its unique hilt. The most beautiful of these would usually fetch a hefty sum for its high artistic value.

Main Gauche is a dagger that provides 24 ATK and 10 DEF. It is crafted using 300 gil, Rockbeetle Husk x3, and Iron Ore x8, and by finding and turning in the Earth Key found at Lost Village of Marlo.

The name of this dagger comes from the term "left hand." It is used as a secondary weapon in combination with a long sword, the main weapon. It features a large guide and provides a boost to Evasion comparable to equipping a shield.

In Bravely Default, Main-Gauche is a dagger that provides 22 P.ATK, 95 Aim, 3 Critical, and +20 EVD. It can be bought in Hartschild for 3500 pg. The EVD boost effect can be stacked by dual-wielding. The EVD boost is shared by the Kunai and improved upon by the Yatagarasu, which both deal superior damage, though the Main-Gauche is the only one of the three that can be purchased and it is obtained earliest.

In Bravely Second: End Layer, Main-Gauche is a dagger that provides 19 P.ATK, 95 Aim, 3 Critical, and deals 50% more damage to beasts. It can be bought in Hartschild for 1400 pg. 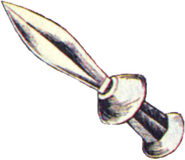 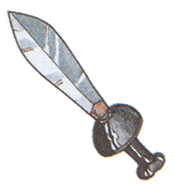 Final Fantasy Crystal Chronicles: My Life as a Darklord. 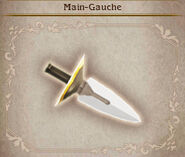 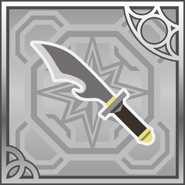 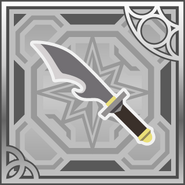 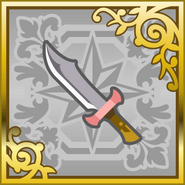 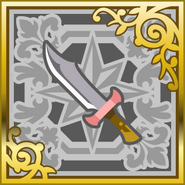 [view · edit · purge]Main gauche means "left hand" in French. The Main Gauche is the name given to a parrying dagger wielded with the left hand, which was used in the late Middle Ages and early Renaissance, as an off-hand weapon in conjunction with a sword.