Wife of Braev the Templar, and mother to Edea. She was born frail, and fell ill when Edea was an infant.

Mahzer Lee (ヲカエ・リー, Wokae Rī?) is a non-playable character in Bravely Default and Bravely Second: End Layer. She is the mother of Edea Lee and wife of Braev Lee. She was sick and was taken care of in the White Magic hospital in Eternia.

Mahzer is a 40 year old woman with long blonde hair. She wears a long tan dress with long ruffled sleeves and a tie around her waist. She wears a blue shrug with a red clasp over her shoulders.

Prior to the events of the game, Mahzer was born in Gravemark Village and lived alongside her best friend, Braev. After a few years, the couple got engaged and left for Eternia to get married, only to later come back and discover that the Great Plague had struck their village, ending the lives of a majority of its inhabitants. Soon after this event, Mahzer was stricken with a deadly illness and was later admitted to the White Magic hospital in Eternia, following Braev's execution of the earth vestal and his implementation of the white magic cables to extract and utilize the Earth Crystal's regenerative properties.

When the party arrives at Eternia, they are approached by an old friend of Edea's who informs them that Edea's mother is receiving treatments at the White Magic hospital. Worried about her mother's condition, Edea goes to the White Magic hospital to see her mother, accompanied by the party. Upon arriving at the hospital, she is greeted by Mahzer, who recognizes Agnès as the wind vestal and notes that Braev keeps her updated on the current events. Edea goes on to tell her mother about her harrowing journey, informing her that she now has at least some grasp of what is black and what is white.

After the party defeats Braev, Mahzer who was brought in by Lord DeRosso rushes to his side. Edea is still at odds with the idea of awakening the Earth Crystal as such would render her mother's treatments invalid and therefore putting her mother at risk of death once more. However, Lord DeRosso informs her that Braev had managed to advance science and technology within Eternia by a hundred years due to his usage of the Crystal's energy, thus reassuring Edea that her mother would survive whatever illness she had prior, whether or not they decide to awaken the Earth Crystal.

In the later worlds, Mahzer can be seen at the White Magic hospital receiving treatments. In the third world, she appears in the hospital with Braev, mourning the death of their daughter. After seeing a different Edea, who is traveling with Agnès, best Braev in battle, Mahzer offers Edea and Ringabel the chance to join them at a family dinner. Sage reveals this to be a test of Edea's perseverance, and after Edea refuses to take up the life of her dead counterpart, allows Mahzer to retain these memories as a means of comfort.

This section about a character in Bravely Default is empty or needs to be expanded. You can help the Final Fantasy Wiki by expanding it.

This section about a character in Bravely Second: End Layer is empty or needs to be expanded. You can help the Final Fantasy Wiki by expanding it.
Spoilers end here. 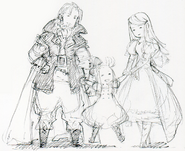 Sketch of Mazher with Braev and a younger Edea.

Mahzer embarrassing Edea.
Add a photo to this gallery

Mahzer Lee is a play on "motherly". Her Japanese name is a play on okaeri (おかえり?), meaning "welcome home". The wo (ヲ/を?) kana is usually pronounced the same as the o (お?) kana.

[view · edit · purge]Lee is an English name derived from Old English leah for "clearing; meadow". Li is the pinyin and Wade–Giles romanization (spelled Lí, Lǐ, or Lì when pinyin tone diacritics are used) of several distinct Chinese surnames that are written with different characters in Chinese. Lee is also the typical romanization of the common South Korean surname I (Hangul 이) and North Korean surname Ri (리).