The Mah'habara Subterra is a location on Gran Pulse in Final Fantasy XIII. It is a vast network of underground tunnels carved by the fal'Cie Atomos, who rolls through the area. Before the War of Transgression, people used to mine precious minerals in the tunnels, but now only the remnants of mining operations can be found, including a variety of excavation robots.

Mah'habara is an underground labyrinth of tunnels excavated by the fal'Cie Atomos. The advanced civilization of Gran Pulse once established mining operation here, targeting the mineral and ore deposits exposed by the fal'Cie's digging. Long-abandoned engineering and excavation drones are now the only traces of human society that remain, the miners having disappeared long ago.

The party enters the Subterra after finding it to be the only way out of the Archylte Steppe. While in the Flower-filled Fissure, Fang says she became Ragnarok during the War of Transgression and left Gran Pulse in its current state. The shock of Fang's claim and Vanille's denial causes her to summon her Eidolon, Hecatoncheir.

After the battle, Fang scolds Vanille for lying to her, but tells her she is not alone anymore and that they have a new family. Later on, when Hope tampers with a Dreadnought and falls off into Atomos's path, other nearby Dreadnoughts jump down to stop the fal'Cie, which allows the party to board it and ride to the tunnels' end to the Sulyya Springs near Taejin's Tower and one step closer to Oerba.

In the optional area of the mines (access granted by riding Atomos back from Sulyya Springs) one will eventually come across an area with six bombs. They can easily be killed in a matter of seconds for 7,140 CP each time. The bombs will respawn when the player backtracks a little.

Another spot, or rather route, useful for leveling is at the beginning of the Subterra. By going from the save station to the spot with the five Hoplites right before the Juggernaut and back to the save station one can easily gain around 33,180 CP in one round.

Maw of the Abyss

Deep in the Dark

An Asylum from Light

The theme "The Vile Peaks" plays here as the background theme. 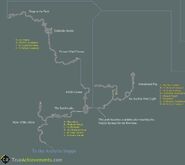 Maw of the Abyss.

Deep in the Dark.

[view · edit · purge]The Mahabharata is one of the Sanskrit epics from ancient India. It is an epic poem that has been described as one of the most important works of man along with Homer, William Shakespeare or the Bible. Within its text, the major theme is war, expressed as a dialogue between five brothers discussing whether the suffering caused by war can ever be justified. Ideas such as proportionality, just means and fair treatment of captives are explored.