I am Sandy! I'm Cindy! And Mindy! We're the Magus Sisters! Sorry, but your quest will be over here. Take our Delta Attack and farewell!!

The Magus Sisters (メーガス三姉妹, Mēgasu San Shimai?, lit. The Three Magus Sisters) are recurring characters in the Final Fantasy series who appear as a triad. They first appeared in Final Fantasy IV. Sandy (ドグ, Dogu?, lit. Dogu) is the tallest and middle sister, Cindy (マグ, Magu?, lit. Magu) is the portly and oldest sister, and Mindy (ラグ, Ragu?, lit. Lagu) is the smallest and youngest sister. They are associated with the Delta Attack ability.

The Latin-text Japanese names for the sisters (given above following "lit.") are the names given for their Final Fantasy X incarnations in various Final Fantasy Art Museum sets.

The Magus Sisters appear as a boss at the top of the Tower of Zot where they are minions to Barbariccia of the Air, one of Golbez's Archfiends. They attack using the Delta Attack, in which Sandy casts Reflect on Cindy and Mindy who use a level two elemental spell or Bio on Cindy, reflecting it on to Cecil's party. Cindy can revive her allies, and thus it is a good idea to concentrate the party's attack on her first.

The Magus Sisters before the battle.

The Magus Sisters in the Tower of Zot (DS/iOS).

Cindy, Mindy, and Sandy are bosses fought in the Subterrane. They fight in the exact same way as in the previous game, and can be dealt with in the same manner.

The Magus Sisters appear as an optional aeon found in Remiem Temple after opening its back door with the Flower Sceptre and the Blossom Crown (when Anima and Yojimbo are recruited). The Magus Sisters act as three separate players, and their moves cannot be controlled, only suggested with shouting commands such as "Fight!", "Help Each Other!", and "Go, Go, Go!". However, their moves and stats are very strong, making them worth using.

When the sisters perform their Overdrive, they surround the enemy party in eight crystals, four of blue hue, and four of red-orange hue. This is a reference back to Final Fantasy IV, where there were four blue crystals of the surface world, and four red-orange crystals of the Underground.

The dark versions of the sisters can be fought as superbosses in the PAL, International, and HD Remaster versions of Final Fantasy X. They are located at the Mushroom Rock Road after the events in Bevelle. They can be fought together or separately, if the player manages to outrun their summoners on the path to the elevator.

The Magus Sisters return as the second aeon battle waiting to impede Yuna, Rikku and Paine's venture into the Farplane.

The Shikaree Sisters, also known as the Sin Hunters, are a group of Mithran hunters encountered during the Chains of Promathia main scenario. The sisters start out as an antagonist group aiming to capture Prishe and Cardinal Mildaurion, but later join the Adventurer's entourage to stop the Twilight God.

While the group is not directly referred to as the Magus Sisters in-game, they serve as Final Fantasy XI's appearance of the recurring group, as confirmed by the summon library in Dissidia Final Fantasy. Simply referred to as Shikaree X, Shikaree Y, and Shikaree Z, they wield the sisters' respective weapons (scythe, daggers, polearm) and have their own version of a delta attack in the form of skill chaining.

The Magus Sisters appear in Final Fantasy XIV: Endwalker as Lunar primals who serve as final bosses of the Tower of Zot.

They are a trinity of goddesses long revered by the people of Thavnair. Cinduruva, the eldest, is said to be bearer of wisdom, Sanduruva that of prosperity, and Minduruva, the youngest, ingenuity.

The Magus Sisters appear as Liliths and are fought in "Mission #077: Free Baguba!" where they are known as Naga and each know only one of the three abilities the Lilith can use (Cindy uses Poison Frog, Sandy uses Twister, and Mindy uses Kiss). When they are all defeated, Mindy will say she should have used her special attack, a reference to the Magus Sisters' Delta Attack.

The Magus Sisters appear as a summon. In addition to appearing as a group summon, each Magus Sister appears as a separate Signet for the player to obtain. Each of their special attacks are based of their abilities from their Final Fantasy X appearance. 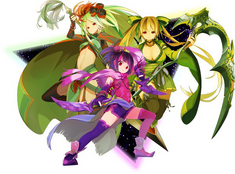 The Magus Sisters appear as a non-elemental summon. They can only obtained after doing the Tower of Babil limited time event. Their special attack is Delta Attack, which inflicts non-elemental damage to all enemies and recovers the HP and reduces damage for two turns to all party members. All versions of the summon are able to go up to rank 5. Summoning the Magus Sisters costs 2 points from the Consumption Gauge. 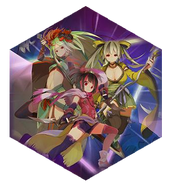 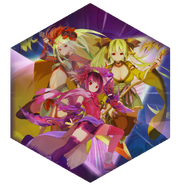 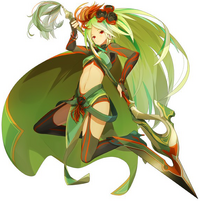 Sandy appears a fire-elemental summon. Her special attack is Razzia, which deals fire-elemental damage to all enemies. All versions of Sandy are capable of going up to rank 7. Summoning Sandy costs 2 points from the Consumption Gauge. Sandy's stat growth is more focused towards increasing the strength and magic stats.

Similar to her original Final Fantasy IV appearance, her artwork depicts her wielding a staff.

Sandy may teach the following abilities: 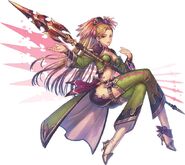 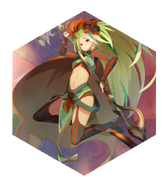 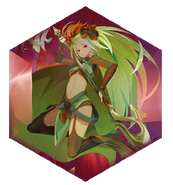 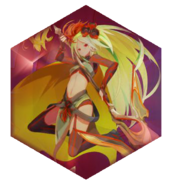 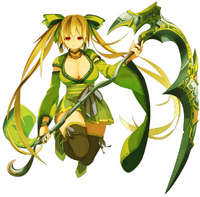 Cindy appears a water-elemental summon. Her special attack is Camisade, which deals water-elemental damage to all enemies. All versions of Cindy are capable of going up to rank 7. Summoning Cindy costs 2 points from the Consumption Gauge. Cindy's status growth is more focused towards increasing the strength stat.

Similar to her original Final Fantasy IV appearance, her artwork depicts her wielding a scythe. Unlike her normal heavyset appearance, Cindy is thin. Alluding to her appearance in the prior games, she is drawn with larger hips and bust size than her sisters.

Cindy may teach the following abilities: 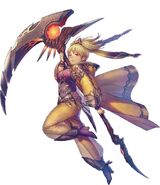 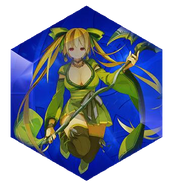 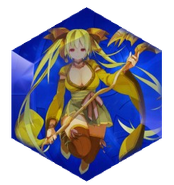 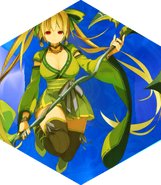 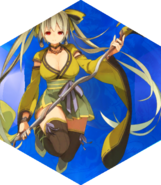 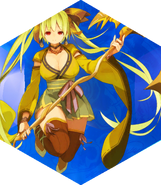 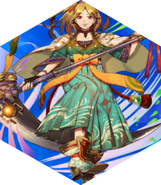 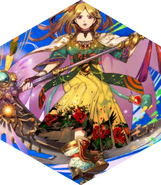 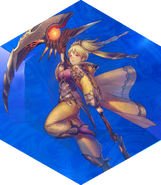 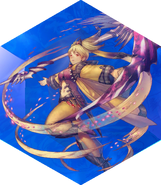 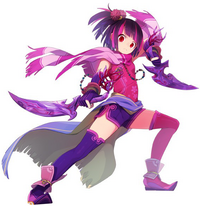 Mindy appears a wind-elemental summon. Her special attack is Passado, which deals wind-elemental damage to all enemies. All versions of Mindy are capable of going up to rank 7. Summoning Mindy costs 2 points from the Consumption Gauge. Mindy's status growth is more focused towards balanced strength, magic, and speed stats.

Similar to her original Final Fantasy IV appearance, her artwork depicts her wielding a pair of daggers.

Mindy may teach the following abilities: 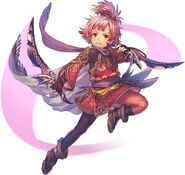 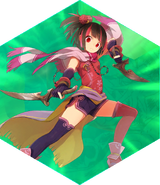 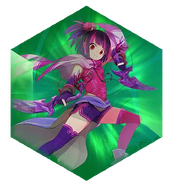 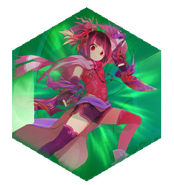 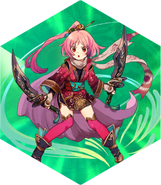 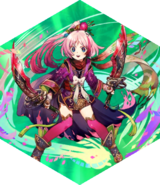 The Magus Sisters appear as a summon that halves the opponent's Bravery points and base Bravery for a period of time.

Their auto version appears after the summoner's opponent deals a Bravery Break on the summoner, and shows their Final Fantasy X artwork, while their manual version shows their Final Fantasy IV artwork. The Magus Sisters' auto version can be obtained in the third stage of the Destiny Odyssey X storyline, and its manual version can be obtained in its second stage.

The Magus Sisters are a summonstone, with the same function as in Dissidia. Their auto version is now found in Chapter Four: Guidance of the Moon of Scenario 013. The manual version can be purchased from certain Moogle Shops for 30 KP.

Whilst not physically appearing, Yuna can summon Mindy's Glyph to use Passado. 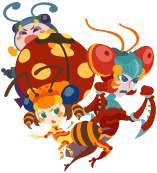 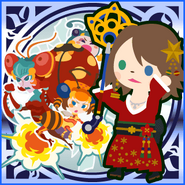 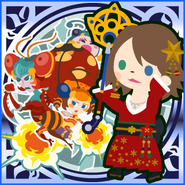 Sandy! Mindy! Throw everything we've got!

Delta Attack then! Leave it to me!

Besides the sisters being individual boss enemies in the Tower of Zot event, they also make a cameo appearance in the second season as one of the groups competing in the Emperor's tournament. Lasswell's party meet up with them on the road to Visectrum. They later perish during an intense fight with The Orders, asking Lasswell to please free their parents if they yet live.

Sandy, Cindy, and Mindy are the three witches known as the "Magus Sisters."

The Magus Sisters appear as an earth-element ability card. Their ability is Delta Attack which is a ranger ability that allows a single-target earth attack with a slow effect. They produce four earth orbs in battle. They possess the extra skills Breaker-Killer, Critical Retrieval and Critical Sundering. Their auto-abilities are HP Up+3% and Enhance Earth+3%. They can be obtained from the Ability Card Shop or through Summoning.

The Magus Sisters appear in the Final Fantasy Trading Card Game as a Wind-elemental Forward card.

The Magus Sisters appear as the antagonists of the manga's second arc in Mysidia, and are featured in promotional artwork. The sisters are wanted criminals who have committed several infamous acts of terrorism. As members of the "Forbidden Arts Guild" their goal is to destroy the current order and establish a new one.

The Magus Sisters are high-ranking spellcasters, able to use spells considered difficult, such as the likes of Float, Firaga, Blizzaga and Graviga.

The statue in Alexandria resembles the Magus Sisters, one figure being short, one being tall and slender, and the last being bulky. A plaque by the statue tells of three Knights of Pluto who fought bravely in the 15th Lindblum War in 1601.

In the original Kingdom Hearts, "Mindy", "Cindy", and "Sandy" are the names of three Gummi Ship blueprints.

The Magus Sisters is a chance card, the card's ability: Obtain all suits (replace with wild card if suits are held).

In Live A Live, an RPG for Super Famicom developed by Square and directed by Final Fantasy IV lead designer Takashi Tokita, the bosses Chan, Shan, and Lin resemble the Magus Sisters.

Magus Sisters may be a reference to the Moirai, often known in English as the Fates. The Moirai were the three incarnations of destiny—Clotho (spinner), Lachesis (allotter) and Atropos (literally 'unturnable' but metaphorically 'inflexible' or 'inevitable'—i.e. death)—who controlled the thread of life of every mortal and acted independently; even gods needed to submit to them. This could be reflected in Final Fantasy X by the player not being able to directly command the sisters like the other aeons.

The Japanese names of the Sisters may be derived from Dogra Magra (ドグラ・マグラ, Dogura Magura?), a 1935 novel by Yumeno Kyūsaku. The novel is regarded as an example of Japanese avant-garde gothic literature.

In Final Fantasy X the special attacks "Razzia" and "Camisade" have origins in military tactics: Razzia comes from Arabic, Ghazw, meaning "raid" and Camisado is a surprise raid during times when the enemy is supposed to be asleep. Passado is a fencing skill—a forward lunge with an epee or rapier.