The Magus (魔人, Majin?, lit. Magician), also known as Arcanist, is a recurring job class in the Final Fantasy series. They are generally an upgrade to Black Mages. The Magus has effectively replaced the Black Wizard job that appeared in the original Final Fantasy.

Magus are dressed similarly to Black Mages, being covered by black robes and wearing pointy hats with a yellow crescent moon on it, hiding their faces and showing only yellow eyes. Magus have more access and proficiency with higher-rank Black Magic than Black Mages.

The Magus is a job gained from the Earth Crystal. A Magus can cast all Black Magic spells. They also possess higher MP for high-level Black Magic. The Magus can be considered a powered up version of the Black Mage.

The Magus serves as the counterpart of the Black Mage job on The First, and serves as the job of Nyelbert. When on The Source, Nyelbert goes under the title of the "Magus of Darkness".

Players have the chance to use the job when Nyelbert is playable in a battle instance during the magic caster DPS role questline in Shadowbringers.

The Magus job is obtained in the Tome of Twilight chapter, and is exclusive to Warriors of Darkness. The Mask also appears as a Magus.

These mages reveal little of themselves as possible to maintain their dark, brooding image.

The Magus is a character available to the party, he uses the Flare ability during battle. He unlocks at level 53.

A skilled spellcaster who uses his expertise in black magic to devastate his foes. The magus is a master of the black magic arts, making him a formidable offensive magic user.

Magus is a playable character who could be initially recruited as the First Time Reward for completing Sister Ray on Classic difficulty in FF VII track of the Core Dungeons.

The enemy Magician and its two palette swaps; Wizard and High Wizard resembles the Magus job from the Final Fantasy series. They use their rods and offensive elemental spells against the party, and are considered enemy embodiment of the Magician's Dark job class path.

The Magus job class itself is the Darkmost job of Angela, specializing greater in fundamental stats to empower existing spells to overwhelm opposition, and allows access to the class exclusive "ultimate" spell Ancient. Its Level 3 Tech is Hot Shot, which allows the practitioner to utilize their staff as a firearm and fires bullets at the nearest foe. According to in-world lore:

Considered to have strayed far from the path of contemporary magehood, the Magus has reached the echelons of attaining what can be called the ultimate level of magical power. Delving deeper into study than any typical practitioner of magic, the Magus has rediscovered lost and ancient methodologies to apply that excel anything the current world sees in use; however, whether they know it or not, such methods tapped into discovered at their era were decided to be forgotten: considered with potential of great danger and abuse, these ways were then cast down as taboo, and were abandoned for the sake of such forbidden practices to never ravage the world again. Now in command of these forsaken powers, heaven and earth trembles in the face of such magic that indiscriminately destroys and decimates all who stand in the way of its caster.

There's a statue of a Final Fantasy III-style Magus inside the Academy of Magic in Geo, located in Mephianse's office in the top right corner near the entrance to the office.

The Arcanist (Magus in Japanese version) is a job obtained by defeating Victoria F. Stein. They specialize in dark-based abilities that kill or damage enemies and allies with certain status effects. They can also enhance Magic Attack at the expense of HP or enhance Black Magic attacks. They have an S rank in MP which is good due to their ability to double the cost of spells in order to make them more powerful. 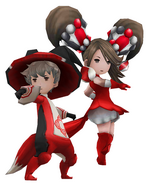 Tiz and Agnès as Arcanists in Bravely Default.

The job's Japanese name of (魔人, Majin?) derives from the Witch/Demon (魔, Ma?) and Person (人, Jin?) kanjis. While Majin (魔人) has no direct single word English translation, the most common interpretations are that of magician, sorcerer, or conjurer.

While spelled the same in hiragana, (まじん, Majin?), the job's Japanese name is not the same word of Majin (魔神, Majin?) commonly used for Demons Gods, which derives from the Witch/Demon (魔, Ma?) and God (神, Jin?) kanjis.

In the original fan-translations of the Famicom version of Final Fantasy III, the Magus was known as Warlock. [view · edit · purge]A warlock is a male practitioner of evil magic (distinguished from a wizard or sorcerer, whose magic may be benign).