The Magus is a job in Final Fantasy Dimensions obtained during the finale of the Tome of Twilight chapter. It is exclusive to the Warriors of Darkness and functions as an enhanced version of the Black Mage job.

The Magus has access to level 8 Black Magic by default and allows characters to use the final tier outside of the assigned job. The job exclusively learns the Flare and Ultima spells upon leveling up. They also have access to the Clarity ability, which restores MP roughly equal to 80~85% of the caster's Mind stat to all party members, but has a chance of failure. The job learns the Boost Element ability set, allowing the Magus to use En-Spells, causing the physical attacks of both the player and enemy party to align to a specific element, which makes the job useful against enemies with elemental weakness.

Despite the job being an updated Black Mage, the Magus lacks the magic boost passive of its predecessor, making leveling the former job needed to take full advantage of Magus. The Magus is a powerful magic-casting job, especially when combined with the ability to cast spells twice with the Red Mage's Dualcast, and even being the key to crafting one of the most powerful fusion abilities, Gigaflare.

In the original Japanese-exclusive cellphone version, all party members dress in either blue or black robes and wear pointy hats with a yellow crescent moon, hiding their faces and showing only yellow eyes. The sprites of the cellphone version are heavily inspired by the Magus sprites from the original NES version of Final Fantasy III.

In the remastered versions for iOS and Android, these designs are abandoned, with the characters wearing blue cloaks with crescent moons on the collar, and simply hiding their faces and showing their yellow eyes. The only difference between the male and female characters is the length of their cloaks and the lack of gloves on male characters.

Magus is the job with the highest intellect.

The guest character The Mask, unlike most of the other guests, does not have the same stats as the Magus job, instead he has his own table of stats during chapter 3, and another one during chapter 4. 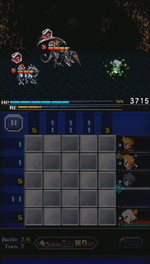 Nacht as a Magus.

Alba as a Magus.

Diana as a Magus.

Glaive as a Magus.

The Mask as a Magus.

The job's Japanese name of (魔人, Majin?) derives from the Witch/Demon (魔, Ma?) and Person (人, Jin?) kanjis. While Majin (魔人) has no direct single word English translation, the most common interpretations are that of magician, sorcerer, or conjurer.

While spelled the same in hiragana, (まじん, Majin?), the job's Japanese name is not the same word of Majin (魔神, Majin?) commonly used for Demons Gods, which derives from the Witch/Demon (魔, Ma?) and God (神, Jin?) kanjis.