Magoroku (孫六兼元, Magoroku Kanemoto?) is a recurring katana in the series.

Magoroku is the Samurai's artifact weapon, obtained from the quest "The Sacred Katana". It is a 2-handed katana equippable by Samurai level 42 and higher with damage 56, delay 450, and +1 to Strength and Agility.

Magoroku is a low to mid-ranked katana that provides 62 Attack, 5 Evade, 29 CT, 13% Combo Rate, and requires the Katana 2 License to equip. It can be bought for 6,600 gil at Rabanastre, Nalbina Fortress, and Mt Bur-Omisace or dropped from Wyrdhare (3% chance).

In the Zodiac versions, it now provides 50 Attack, 21 Evade, 31 CT, 20% Combo Rate, and requires the Katana 2 License to equip. It can be bought for 4,000 gil at Jahara and Mt Bur-Omisace, dropped from Urutan Exile (3% chance), or found as treasure at Giza Plains - The Rains (Tracks of the Beast) and Zertinan Caverns (Halls of Ardent Darkness) and Trial Mode Stage 44 (with Diamond Armlet). It can be use by the Bushi. 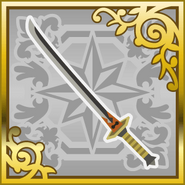 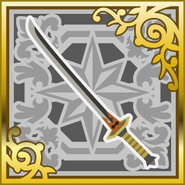 [view · edit · purge]Kanemoto Magoroku was a famous swordsmith in the Sengoku, during the Daiei Period of the Muromachi Era. The second successor to the Kanemoto School that descended from the legendary Mino School of katana, Magoroku's rise to fame would be known by his incredibly sharp blades and his synonymous trademark temperline pattern of senbonsugi, being a series of three triangular apexes with the third rising the highest like a panorama of pine trees. Out of all in the history of katana smithing, he is one of the Five Creators of Saijo O-Wazamono quality cutting katana, along with Kotetsu, Nosada, Osafune, and Sukehiro.