The Magitek Research Facility is an unrevisitable location in Final Fantasy VI located in the imperial capital of Vector. It is where experiments on espers are carried out, and is where the empire's Magitek weapons are produced. The facility was developed sixteen years ago.

Completing the location in the mobile/Steam port earns the Terra's Truth achievement.

The Returners infiltrate the facility with the help of a Returner member stationed in Vector, and try and find the captive espers used to power the Gestahlian Empire's Magitek weapons.

Deeper inside the facility, the Returners find Kefka torturing two espers before throwing them into a garbage chute, laughing at the power he has gained from them, as well as hinting at his plans to restore the Warring Triad using the espers' magic.

The group follows the two espers into the garbage chute, however, when attempting to contact the creatures, they strike the party. The two espers, revealed to be Ifrit and Shiva, come to their senses once sensing Ramuh's presence and cease attacking the party. With the last of their strength, they transform themselves into magicite and beg the party to save the rest of the espers within the facility.

The Returners climb up to the main lab where six espers are held captive. The Returners shut down the machine, but the espers are already too weak from the experiments, and turn themselves to magicite. Cid arrives and speaks to Celes and Locke, inquiring about rumors that Celes is an imperial spy. Kefka appears and insists the rumors are true, and has two imperial soldiers attack the group. To prove her loyalty, Celes teleports the imperials, herself, and Kefka away.

The fighting damages machinery in the room that begins to explode, and Cid and the other Returners flee to a mine cart. The Returners ride it to safety, meeting up with Setzer and fleeing to the Blackjack. Kefka tries to activate a pair of cranes to stop them, but the Returners destroy them and escape.

The events trigger a shift in the Third Gestahlian Campaign—the empire's supply of magic is cut off, but they acquire the knowledge of magicite as a superior source of magical energy than the forced extractions from live espers. With this information, and due to the devastation caused by the Returner raid, the Magitek Research Facility is dismantled. Pieces of it make up the debris used to form Kefka's Tower in the World of Ruin.

The Magitek Research Facility is divided into multiple areas. The first two screens are the Magitek Factory, where suits of Magitek Armor are produced. The area is full of conveyor belts, cranes, duct piping, and lift platforms that make navigation confusing, and some methods of moving between areas, like riding cranes and lift platforms, are one-way. Numerous passages cross under walkways and through walls and may not be immediately apparent. Within the factory is a garbage chute where Kefka dumps the espers Shiva and Ifrit, and the chute is full of bones presumably from other espers or creatures that have been used for experimentation. A crane in the garbage chute allows passage back to the factory floor.

Out of the garbage chute, a long staircase leads up to the Research Labs, where the majority of espers being held are located. After the area is damaged in the fighting between the party and Kefka, Cid leads the party down a lift to a mine cart loading dock where they board a cart and escape, riding on the rails near the entrance to the facility in Vector.

In the Pixel Remaster port, the Magitek Research Facility is given new aesthetic features to make it easier to navigate. Pipes have black and yellow caution stripes around their exits, there are glowing arrows and caution stripes on the floor where cranes move back and forth, and lights are placed above doorways and near open conveyor belts. The ladders and lifts in the factory are brighter to stand out better, and the party will not automatically use them or the conveyor belts; the player must press the confirm button, also meaning that a prompt will appear over the party's head to alert the player. The area also has an overall slightly adjusted color palette to better contrast its floors and environment features, and the crates around the facility are recolored yellow and silver.

In the mine cart area, the random encounters are disabled. The encounter's are set to formation #356 (Flan x6) and #357 (Flan x4) with this battle background:

From the conveyor belt into the second room, a flight of stairs to the right leads to a large area with crates, an opening between them leads into a duct pipe and a side room with an Icebrand and Zephyr Cloak. Continue down the duct pipe to be taken back to the entrance of the room by the conveyor belt. Below this area are two walkways leading down; taking the right walkway and descending the stairs finds a Golden Helm in a small area beyond the door. Further right there is Golden Armor in a small area at the bottom of the screen in a hidden chest, and on the walkway further right is a Tent.

In the garbage chute, the player can take the Ifrit and Shiva magicites after defeating them in battle. After defeating Number 024 and reaching the main esper storage room, the player will receive six more magicite shards: Bismarck, Carbuncle, Maduin, Phantom, Catoblepas, Unicorn.

After reaching the research labs, in the hallway of glass tubes, directly below the left-most tube, walking to the left there is a hidden chest containing a Stoneblade.

The Magitek Research Facility cannot be revisited, so any treasures need to be picked up on the first visit.

The player's objective is to free the captive espers and escape. Despite the facility's complex layout, there is a simple linear path through. If the player wishes to acquire all the treasures, the above paragraphs detail their locations and how to reach them.

When Number 024 is defeated, enter the room beyond it and pull the switch to initiate a cutscene, where Celes will leave the party (all her equipment will be un-equipped) and the party receives six new magicite shards. Follow Cid to the lift and disembark in a small room with a save point. Speak to Cid and the party will board the mine cart out of the facility. After several battles the party will fight Number 128, after which they arrive outside the facility in Vector. Flee south until the party meets with Setzer, and after a cutscene the party will face the Cranes with Setzer joining the party in the battle. With their defeat, the party's adventure through Vector and the Magitek Research Facility are complete. 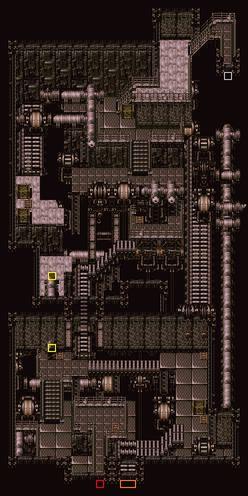 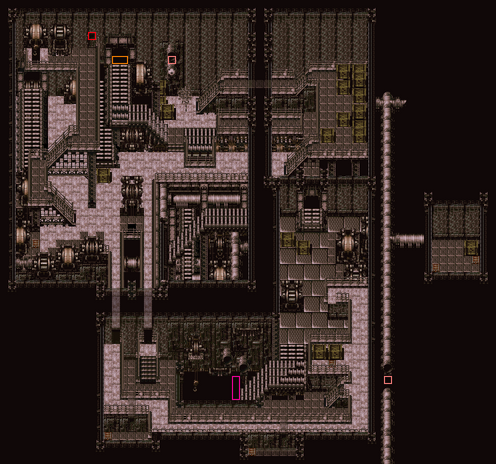 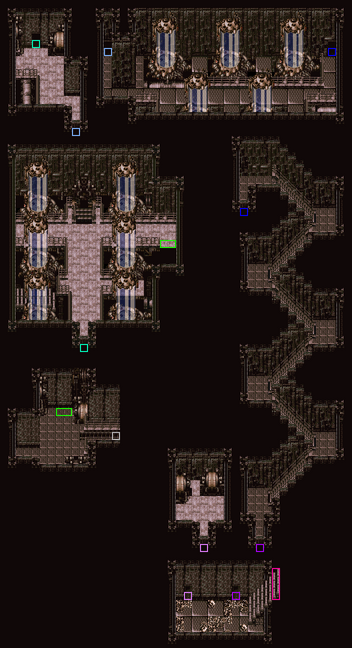 The Magitek Research Facility appears as the Battle Music Sequence (BMS) for "Battle to the Death".

The Magitek Research Facility returns as the BMS for "Battle to the Death."

The Magitek Research Facility appears as a regular dungeon, as well as a location in the Survival Event Magitek Facility Infiltration and the Challenge Events Legendary Plunder, Touched by Magic, and Back to the Skies.

The party has infiltrated the Imperial capital of Vector in hopes of waking Terra. Aided by their fellow Returners, they enter the Magitek Factory where the espers are being held.

One of the greatest challenges in making Final Fantasy VI was the rail scene where the Returners ride their way out of the Magitek Research Facility. Square used the Super Famicom screen support mode known as Mode 7 and painstakingly illustrated the graphics one dot at a time to create a mock 3D effect. Although producing these graphics was a huge undertaking, the results were far rougher than the developers had hoped. In the end, this section didn't leave a lasting impression as had been intended.[1]

The mine cart room at the end of the facility has a random encounter set assigned to it, the same encounters as the save point room where all enemies are various formations of Flan. However, encounters are disabled in this area.

As the Magitek Research Facility cannot be revisited, Ifrit can be permanently lost if the player continues through the facility without picking it up. Shiva blocks the door out of the garbage chute, and is thus required to obtain. All other magicite can still obtained in the World of Ruin at any point. The only other missable esper is Ragnarok if the player chooses the sword instead of the esper. 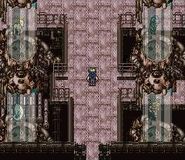