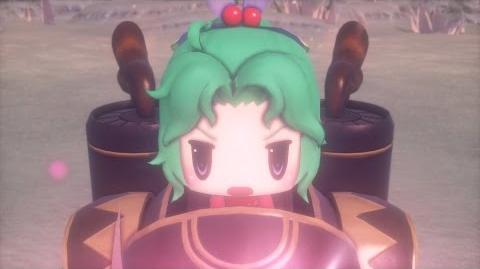 Shoot a laser that exploits weaknesses. Hold down the button to charge up power. Works with Gun Drone.

Magitek Laser is an enemy ability used by Magitek Armor, Heavy Armor, Proto Armor, Mega Armor, Chaser, Sky Armor, Laser Gun, Pluto Armor, Machine, Guardian, Schmidt, Air Force, Satellite, and Tunnel Armor. It deals Lightning-elemental damage to one target with a spell power of 20 and Hit Rate of 150 at the cost of 20 MP. It is vulnerable to Runic.

Magitek Laser is a Firearm Skill that attacks with all elements, and also has the property to exploit an enemy's weakness. This means that if an enemy is weak to any element, it will take additional damage from Magitek Laser. The laser itself fires in a straight line and pierces enemies, enabling it to hit multiple targets. It is compatible with Gun Drone, but the drone often fires the laser at an odd angle and misses the player's target.

Magitek Laser is Terra's Champion summon ability. It inflicts neutral magical damage to one enemy, ignoring defense. It also grants Magic+ to all allies. It is unlocked after gaining the airship in chapter 20 and costs 1★ gauge to use. When used "The Decisive Battle" from Final Fantasy VI plays.