Cid Pollendina: Oh, shut up and help me remodel the Magick City of Gariland page!
Please expand this article into a full one. The following tasks need to be completed:

Home to the Royal Akademy for the Magickal arts, famous for producing Elidibus, mage hero of the Fifty Years' War.

The Magick City of Gariland, also known as Magic City Gariland, is a town in Final Fantasy Tactics located east of Eagrose Castle and west of the Merchant City of Dorter.

It is controlled by the Order of the Northern Sky and contains the akademy where Ramza Beoulve and Delita Heiral trained. It is the site of Ramza's first battle and the hometown of Elidibus, an optional boss fought late into the game.

Beginning of the game[]

One of the business signs in Insomnia in Final Fantasy XV reads "ガリランド進学セミナール", alluding to the akademy in the Magick City of Gariland. 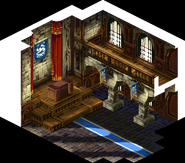