Magic Urn is an enemy encountered in the Cavern of the Stolen Fayth. It is a purple creature hidden inside a pot whose symbols can be attacked to earn various rewards, but hitting the wrong symbol causes the enemy to self-destruct.

0 slots, 0 abilities
None
None
None

Magic Urn is an unusual enemy, as it will explode when the incorrect eye is attacked, damaging the party. If the party attempts to steal from it, it can kill the entire party with Self-Destruct. Attacking the correct eye earns items. There is no set pattern and hitting the correct eye is based on chance. Magic Urn can only be killed with Yojimbo's Zanmato or Doom, which takes 200 turns to work if used on the center eye, or 3 turns if used on any other eye. If Magic Urn is killed in this fashion it gives nothing as a reward.

When receiving an item from Magic Urn, only the name of the item, not the quantity, is displayed.

Magic Urn has two variants of self-destruction, titled "Wrong" and "Self-Destruct"; the latter is stronger. Self-Destruct is only used by the middle eye in response to Steal, Mug, Self-Destruct (from Kimahri), Attack Reels or Doublecast.

Wrong is used in response to any other multiple-target attack, or if the same eye is attacked more than once in a single battle. Even when not attacking the same eye multiple times, there is a chance of Wrong being used in response; this chance is 40% for the middle eye, and 12% for the four outer eyes.

The middle eye provides only a Potion when stolen from, and will respond with Self-Destruct. The other eyes have nothing to steal, and will simply treat steal as any other attack.

Magic Urn is the only enemy in the game with an Overkill value higher than 99,999. 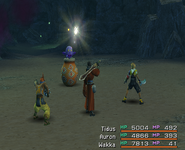 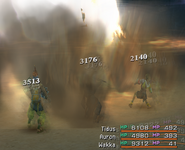 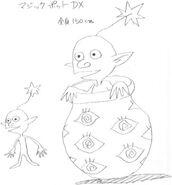