Magic Pot is an enemy from Final Fantasy VII fought in the Northern Cave, yielding abundant EXP, gil, and AP, making them perfect for grinding. They are immune to all damage unless given an Elixir.
See also: Magic Pot

-Abilities whose names are not shown when used are highlighted in italics.
-Magic Pot is immune to all damage until an Elixir is used on it.

Nothing
Turbo Ether (100%)
Nothing

Magic Pot is immune to damage until being given an Elixir (even Game Over from Cait Sith's Limit Break will miss). They may steal items from the player or escape if attacked before being fed an Elixir. After being given an Elixir, if the Magic Pot who has stolen an item is defeated, the item will almost always be given back to the party.

To acquire the needed Elixirs, other enemies in the area have them to steal from (Master Tonberry and Gighee) or the player can use the W-Item duplication bug to produce more.

If ((Last Command was Item or W-Item)

Choose Self
Use <(Report)> on Target
Remove Self 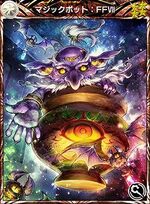 "Gimme".
Add a photo to this gallery
Retrieved from "https://finalfantasy.fandom.com/wiki/Magic_Pot_(Final_Fantasy_VII)?oldid=3320476"
Community content is available under CC-BY-SA unless otherwise noted.