Magic Hammer can be learned from Byblos, Drippy, Apanda, Azulmagia, and Oiseaurare. Magic Hammer damages MP by 50% and costs 3 MP. The player may utilize this ability by catching and releasing a Cursed Being or Drippy.

Quina learns Magic Hammer from Magic Vice and Ring Leader. It deals a random amount of MP damage to one target, and costs 2 MP to cast. It can't be reflected and works with Return Magic.

Magic Hammer is a Blue Magic for the Blue Mage at level 74, learned from Poroggo. It steals an amount of enemy's MP equal to damage dealt for 40 MP, but is ineffective against the undead. It costs 4 Blue Magic points to set. When set, it grants MP -5 and MND +2. It takes 4 seconds to cast and can be recast every 180 seconds.

Magic Hammer is also an enemy ability used by the Poroggo family.

Magic Hammer is a Blue Mage spell added in Patch 5.15. It does AoE damage, gives every nearby enemy a conker debuff, and restores 10% of MP. It can be learned by Epilogi from the Masked Carnival or Apanda from The Great Gubal Library Hard Mode.

Blue Mages learn Magic Hammer from Red Cap. It robs the target of MP and costs 8 MP to use. It has a range of 3 and a Weapon Attack Power of 38.

Magick Hammer is learned from Baknamy-type enemies. It robs target of MP with a range of 3 and costs 4 MP to use. 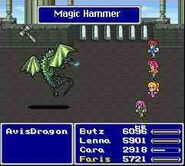 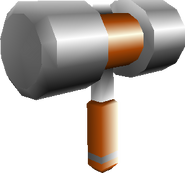 The hammer in Final Fantasy VII.

[view · edit · purge]Uchide no kozuchi is a legendary Japanese "magic hammer" which can "tap out" anything wished for. In Issun-bōshi ("One-Inch Boy"), the hero gains the mallet defeating an oni and amassing wealth. In modern embellishments, he also transforms himself into full adult-size.