Offset by specializing in magical skills, Mages are often physically weak, usually using staves and rods for weapons, and can only wear robes and clothes. Typical battle roles include restoring health without the use of items, efficiently dispatching large groups of enemies using the elements, or empowering allies with defensive or offensive buffs.

White Mages specialize in healing HP and removing status ailments. Often, their skillsets contain spells focusing on enhancing the party's battle capabilities. White Wizard is an upgraded version in the original Final Fantasy who has access to the complete White Magic school.

Devout is an upgraded form of the White Mage that appears in some games. Usually, when the Devout class appears, White Mages cannot use the most advanced spells of their school, and must upgrade to a Devout to do so. The Devout has effectively replaced the White Wizard class.

Black Mages concentrate on dealing damage to enemies through spells. Often, their skillsets contain spells focusing on inflicting status ailments on enemies. Black Wizard is an upgraded form in the original Final Fantasy who has access to the complete Black Magic school.

Magus is an upgraded form of the Black Mage that appears in some games. Usually, when the Magus class appears, Black Mages cannot use the most advanced spells of their school, and must upgrade to a Magus to do so. The Magus has effectively replaced the Black Wizard class.

Red Mages come as "jack-of-all-trades", able to use swords and White and Black Magic both, though often only basic few from each school of magic. Red Wizard is an upgraded form of the Red Mage in the original Final Fantasy who can use high level Black and White Magic normally not available to the Red Mage, though the Red Wizard is still missing some spells from both schools.

Time Mages manipulate the flow of time and space and have a range of non-elemental offensive magic, gravity magic, and status magic, both buffs and debuffs. 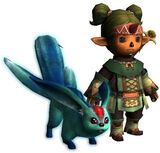 Summoners call forth powerful beasts collectively known as "summoned monsters" that have a variety of skills, such as healing, damaging, supportive, and debilitating. Often, summoning is pricey and is usually best reserved for boss battles.

Illusionist, also known as Evoker and Conjurer, is a Mage class in the series whose role is not so specifically defined. It started as a weaker form of the Summoner class, calling forth summoned monsters for various effects chosen at random. In Final Fantasy XIV Conjurer is a weaker form of White Mage and in the Tactics Advance series, Illusionists use the power of the elements to deal a decent amount of damage to all enemies on the battle field.

Sages are something of an "ultimate" mage that can use every spell from both the White and Black schools, and sometimes Summon Magic as well.