Magazines are recurring items in the Final Fantasy series. In the early series they were of pornographic nature and found as an Easter Egg with no relevance to the plot. In the North American releases, some magazines were either renamed due to censorship, or removed completely.

The Magazine (エッチな本, Ecchi na Hon?, lit. H book) (GBA), also known as Playboy, Playboy Magazine, Smut (PS), PornoMag, Penthouse, or Lustful Lali-Ho (3D), is an item heavily implied being pornographic in nature and the screen turns pink when the player reads it. It is obtained in the Developer's Office, which was not included in the initial American release, meaning the magazine could not be obtained.

The magazine serves a purpose in the 3D version; after getting a copy, placing it on a stool in the Developer's Room causes it to be confiscated, one of the requirements for getting the Reach Augment. There are, in fact, multiple pornographic magazines in the 3D version: the Lustful Lali-ho found in the Dwarven Castle, and the Ninja Sutra, several of which can be found in Eblan. The player can use it in battle, but it will not do anything. It is apparently Cecil's favorite magazine.

Cecil is not the only character who can read the magazine; since any character can be in the lead, any playable character (except for Tellah) can read it at any point.

The Lustful Lali-Ho works the same way as it did in the previous game. It is found inside the Developer's Office by defeating Game Designer.

Many dirty magazine copies can be obtained. If the player fights the Game Designer in the Developer's Room after giving it a Lustful Lali-Ho, they will sometimes receive a Discovery Book, an item that increases a character's max MP by 50.

In the library at Castle Surgate, if the player chooses the bookcase before the "A" file, Bartz will say "A..., as..., aha!... Hey, this is about donkeys!" Lenna will reply "Er... Bartz, what were you looking for?", and he will respond "uh? Nothing, nothing at all!" (Presumably he was searching for the word "Ass".)

"Bushido in the Bedroom" (also called "Book of Secrets") is an item found at Mt. Zozo in the World of Ruin, when the party encounters Cyan. Along with guides for understanding and operating machinery, the player finds the book in Cyan's trunk.

Before the release of Final Fantasy VI Advance the item was merely called "Book of Secrets", and the game shed no light on the nature of its contents. With the release of the GBA version it is implied the "secrets" refers to advice on sex. 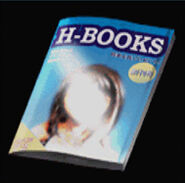 Laguna used to work as a journalist, and many of his articles were published in Timber Maniacs, a magazine that has since ceased publishing due to being viewed too controversial due to its openly political nature. Old issues are still found scattered around the world, and collecting them adds new entries to Selphie's Sir Laguna's Page. At Zell's house in Balamb, there is a magazine in a side room. Inspecting it prompts a message "An old issue of Timber Maniacs.... NOT!"

Other magazines mentioned in name only are Battle Series, found scattered on the Timber Maniacs building's floor, to which Squall comments he has read them all; and Anarchist Monthly, of which some paper clippings can be read on a notice board in the Forest Owls' base.

There is an item called The Girl Next Door that can be traded to Zone in exchange for either 25,000 gil or a Rename Card and Shiva's card. It is described in the menu as "A naughty magazine" and can be found in the Timber Maniacs building. If the player attempts to purchase one in Timber they get told they are not of age. Irvine also appears to have a stash of his own, as he leaves a magazine for Squall and Rinoa in the "secret spot" he has prepared for them in Fishermans Horizon.

Scattered around Eos are various magazines and books the player can read by clicking on them, but they are not items that can be picked up. The Cosmogony books give exposition on the world's Astrals. There is also a fishing magazine that gives hint on fishing spots and what fish can be caught there, and cooking magazines that teach Ignis Scientia recipes.

There is a "Weapons Monthly" magazine in the item shop at Meldacio Hunter HQ. Weapons Monthly is a magazine from Final Fantasy VIII that gives recipes for remodeling weapons.

The newspaper of Insomnia's fall enters the player's key items inventory after the scene where the party finds out about the invasion. Its dated for May 17 and at least one of the pictures on the front page is from a Final Fantasy Versus XIII trailer, showing imperial airships hovering over what appear to be apartment buildings. The magazine Gladiolus appears with is called Heatwave. The book Gladiolus commonly reads during car rides and during some lodging scenes is Silence of Knowledge by Henruit. Oric's Culinary Chronicles is a book series that teaches new recipes.

The book Umbra delivers between Noctis and Luna is the Lovers' Notebook.

Whenever saving by sitting on a bench in Final Fantasy XV: Episode Ardyn, Ardyn reads a magazine titled The World Wanderer. 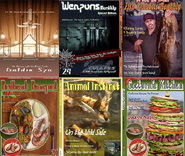 Gladiolus sleeping with a magazine featuring a bikini model.

The Bonga Bugle is a monthly magazine run by two seeq, the Owner and the Head Editor.

This section in Final Fantasy Tactics A2: Grimoire of the Rift is empty or needs to be expanded. You can help the Final Fantasy Wiki by expanding it.

A magazine can be found by either the Warriors of Light or Warriors of Darkness. If used from the inventory, the player gets a different response from whichever character they have in the lead. A dirty magazine can also be found by looking under a bed, but Sarah makes Sol put it back (or puts it back herself if she is the leader). Putting Aigis as leader allows the player to keep it, but with a browbeating from Sarah. Putting Dusk or Elgo as party leaders will allow the player to keep the magazine without any problem.

The magazine can also be used in combat to restore a minor amount of MP.