Mafdet is a fiend in Final Fantasy X found at Lake Macalania. It is covered by a thick shell, so it is best to use Auron or Kimahri's piercing weapons against it. It will attack with physical attacks that can cause Slow, unless Provoked. It uses the same model as the Swamp Mafdet.

Mafdets will drop weapons with any of the elemental strikes and armor with Berserk Ward and/or Defense +5%. In the original JP/NA version, they drop weapons with Strength +3% and Magic +3% instead of Distill Power.

Enemy is Armored.
Attack may cause Slow. 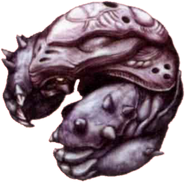 [view · edit · purge]In Egyptian mythology, Mafdet was a feline goddess representing justice and executions. Her image serves as a warning on many chambers and tombs with riches inside.