And that, as they say, is that.

Maechen is a non-player character and scholar in Final Fantasy X and Final Fantasy X-2. He is infamous for his long-winded expositions on Spira's history.

If the party speaks with him at various locations, he will tell stories from history or describe some of Spira's inhabitants, such as the Hypello. The Ultimania guides to Final Fantasy X question the veracity of Maechen's information, saying that he knows a lot that even the priests don't, but whether it is all true is unknown. This implies that the player is meant to draw their own conclusions.

Maechen is a short elderly man who dresses similar to a Yevon priest. He wears a green jacket with yellow, orange and teal accents, a tall miter in matching colors, a white cape, white fingerless gloves, pale trousers and brown boots with elaborate cuffs. He wears round glasses and has a bushy gray beard and mustache.

Maechen is a wise man who has a vast knowledge of the history and origins of all things related to Spira and its many cultures. He is never in a hurry, and his tendency to be thorough with his expositions leads to some listeners growing bored. He travels around Spira offering his knowledge to those who may feel lost. He seems disturbed by certain actions Yevon has taken in concealing Spira's past and sometimes reveals information that the temples have restricted.

Yuna and her guardians meet Maechen on the Mi'ihen Highroad where he tells the tale of Lord Mi'ihen, the Crusaders, and the history of the highroad itself. Thereafter he appears in various other locations, each time with a new story to tell.

On the Moonflow, Maechen explains about the shoopufs and the Hypello. In Guadosalam, he tells about the Farplane and the pyreflies. On the Thunder Plains, Maechen tells the party about the plains and how the lightning towers were built. At the travel agency at Macalania, Maechen tells the lake is frozen due to the fayth in the nearby temple.

In the Calm Lands, Maechen explains the plains have been used by summoners as a battleground for fighting Sin, and that's how the plains acquired their name. In Mt. Gagazet, he reveals much of the lesser discussed history of Yevon.

After Yuna and her guardians fell Sin, Maechen in among the Besaid Village gathering around the bonfire with the Besaid Aurochs and Crusaders.

Maechen divulges many details regarding Zanarkand, Vegnagun, Shuyin, and Lenne. The Gullwings meet him in the Youth League Headquarters in Mushroom Rock Road where Maechen talks about the events that went on since he last met Yuna, telling of the formations of the different factions around Spira. If Yuna listens all the way to the end, Maechen wants to shake her hand, but appears confused by it.

Later, Maechen appears in Chateau Leblanc after the Gullwings receive an old sphere that shows Shuyin. Maechen notes the man in the sphere resembles Tidus, one of Yuna's guardians from her pilgrimage two years ago, who has seen gone missing. He hints there may be a way for Yuna to see him again. Maechen boards the Celsius after the Thunder Plains concert, where he tells the story of Shuyin and Lenne.

In the final conversation with him in Zanarkand, Maechen is revealed to be an unsent who lived since before the destruction of Zanarkand in the Machina War, one thousand years ago. The Final Fantasy X-2 Ultimania Omega states that he had been a fan of Lenne's in his younger days.[1] It is, in fact, Maechen's voice Yuna and company hear on the sphere they had salvaged from atop the Floating Ruins. Maechen had forgotten he was an unsent, but upon shaking Yuna's hand he recalled shaking hands with Lenne, and realized how long he has been around.

Maechen seems to send himself, having accepted death. He disperses into pyreflies. Rikku, however, seems to believe Maechen is still walking the world, and that he'll be back with more stories. 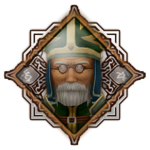 Listening to all of Maechen's stories in Final Fantasy X-2 HD Remaster will unlock the the "Good Listener" trophy/achievement. During his long rambles the player is given a choice to speed through the conversation, but doing so prevents 100% completion credit for the game.

In Final Fantasy X-2 HD Remaster, the player will not be able to pause the game or press the OK button to make Maechen talk faster when he's telling his stories. The only way to interrupt him is using the soft reset command or exit the game through the PlayStation menu. 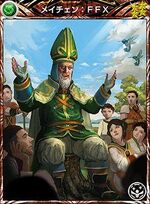 In International/PAL/HD Remaster versions, Maechen disappears after Dark Anima appears at the entrance of Mt. Gagazet. He reappears after defeating Dark Anima, leaving the screen, and returning.

After Maechen's story of Lenne and Shuyin on board the Celsius, he can be briefly seen walking down the corridor while slowly becoming transparent, foreshadowing the revelation during his final meeting in Chapter 5.

Maechen met on the Thunder Plains in Final Fantasy X.