Maduin's Horn (マディンの角, Madin no Tsuno?) is a recurring instrument weapon. It originally appeared in Dissidia Final Fantasy as a weapon for Terra, and is named after her father, Maduin.

Maduin's Horn makes its first appearance as Terra's most powerful exclusive weapon. It is a level 100 weapon that provides +40 BRV and +67 ATK, in addition to Magic Defense +50% and a minor Anti-EX Effect. It can be acquired by trading 31920 gil, Morning Star, Veiled Magic x5 and Amplification Orb x5.

Maduin's Horn is Terra's best exclusive weapon. It provides BRV +40 and ATK +67, with a +20% Physical Defense and a minor Counterattack effect. It can be acquired by trading 182,800 gil, Morning Star, Veiled Magic and Girl's Hopes x5.

Maduin's Horn appears based on its Dissidia Final Fantasy appearance.

Maduin's Horn appears based on its Dissidia 012 Final Fantasy appearance. 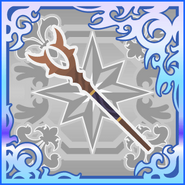 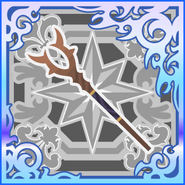