Causes Holy damage to all enemies.

Madeen is an eidolon in Final Fantasy IX who can be acquired as a summon for Eiko. She is a Holy-elemental summon who takes the form of a large bipedal winged beast whose appearance somewhat resembles a white lion. Madeen is Eiko's ultimate eidolon, whom she gains as part of the story. Though typically each game only has one Holy summon—Alexander—it is not summonable by the player in Final Fantasy IX where Madeen originates.

Eidolons manifested to protect the crystal of Gaia and the practice of summoning goes back centuries, many eidolons appearing on a mural on the Eidolon Wall in Madain Sari, the summoners' village on the Outer Continent. As the summoners left the Mist Continent 500 years ago, summon magic fell into legend among the Mist Continent populace. However, Madeen does not appear on the Eidolon Wall, suggesting it is a recently formed eidolon.

Ten years ago, Garland ordered Kuja to destroy Madain Sari with the Invincible, killing most summoners. The few survivors had a child, a young girl who was named Eiko Carol. The day she was born, a little moogle was also born, who came to be known as Mog and became Eiko's loyal friend. Unknown to Eiko, Mog was a fledgling eidolon, perhaps born from the planet's wish to protect Eiko. All of Eiko's elders perished one by one until she was the only summoner left. Eiko made a living in the ruins of Madain Sari with only the local moogles for companions while keeping the art of summon magic alive by herself. She resorted to stealing food from the dwarven village of Conde Petie for sustenance. Mog was always with Eiko, but she was a timid little moogle who often hid under Eiko's clothes, too scared to face the world.

A group of travelers from the Mist Continent caught Eiko when she was out again stealing food: Zidane, Dagger, Vivi, and Quina. Eiko showed them hospitality in a bid to not be alone anymore, and the travelers were amazed that she could summon eidolons like Dagger could, who was unfamiliar with the eidolons Eiko could call forth. Eiko joined the others in the struggle against Kuja's schemes, but he kidnapped her to extract her eidolons. He took her to Mount Gulug where his lackeys, Zorn and Thorn, tried to extract Eiko's eidolons, but the procedure failed as she was too young to withstand it. Kuja did not care if the ritual would kill Eiko and told his lackeys to continue, but at that moment Mog emerged from Eiko's clothes to defend her. Mog entered Trance and transformed into the eidolon Madeen, dispatching Zorn and Thorn.

Eiko realized that her timid moogle companion had always been an eidolon taking the form of a moogle, and now that she had transformed, Mog was gone. Madeen left the hair ribbon Eiko had given to Mog behind, while communicating that she had not disappeared, and would always be with Eiko as her eidolon. Wearing the ribbon, Eiko learned to call Madeen forth in battle. Kuja's witnessing of Mog's transformation had unforeseen consequences, as he abandoned his quest for an eidolon and left to pursue the power of Trance for himself.

Madeen is a white bi-pedal beast with large leathery dragon wings. She looks a bit like a white lion, or a beast version of a moogle. She has a long mane and tail and large paws, her mane is tied up on either side of her face, and tattoo-like symbols cover her shoulders. Her wings are flesh-colored and her eyes are blue. Madeen is presumed to be female, as this was stated as Mog's gender.

Madeen is the only one of Eiko's eidolons who can be perceived communicating in a way that people other than Eiko can understand. The first time Madeen appears, she comes forth without being called by a summoner, unusual for an eidolon. Madeen appears as a result of Mog's Trance, but after the Trance is over, she does not return to being a juvenile moogle, but becomes a full-fledged eidolon. After her transformation Madeen is not shown talking to Eiko again, but her personality could be perceived as being an entity focused solely on protecting Eiko. Eidolons usually come into being from people's memories entering the planet's crystal, taking shape after myths and legends and thus able to appear in different forms. Madeen, meanwhile, appears to have come into existence as a wish made manifest to protect Eiko specifically, though at first she was just a scared little moogle. When Eiko was in danger Mog gathered her courage, entered Trance, and transformed.

In the endgame, the party can find messages on the Eidolon Wall. One of them appears to predict the formation of Madeen:

Message on the Eidolon Wall

Madeen costs 54 MP to summon and is learned from a Ribbon for 120 AP. One Ribbon is obtained as part of the story from the event at the bottom of Mount Gulug. It can also be found in the Forgotten Island chocograph treasure, won from Treno Auction House in the endgame, and gotten as a reward for buying all of Stiltzkin's items when he returns to the Alexandria steeple.

Madeen's attack, Terra Homing, deals Holy damage to all enemies. It deals more damage the the higher level Eiko is, as opposed to number of jewels in inventory like with other eidolons.

The attacks and spell power for Eiko's summons are based her level and length of animation, the short version being weaker. The formula used to determine the amount of damage an eidolon does during its full animation is as follows:[1]

The bonus in the above calculation can be boosted by 50% by equipping Eiko with Magic Racket, Mage's Hat, Flash Hat, Jade Armlet, Light Robe, White Robe, Angel Earrings, Maiden Prayer, or Rebirth Ring. Equipping multiples of these items at once does not stack.

Madeen is an especially useful eidolon against enemies weak to Holy and magical damage in general. Summoning Madeen earns the Wolf in Mog's Clothing achievement in the mobile and Steam versions.

Madeen has an eidolon-type card for Tetra Master, obtained in the endgame. The Old Man and the Weaponsmith very rarely play it in Daguerreo's second floor, as well as Black mage no.56 in Black Mage Village. Straight Shooter Shak and the Eidolon Master in Treno card stadium use the card exceedingly rarely, and it may be faster to get it from the Strong Phantom in Lost Memory, and from the Rare Phantom in Memoria, in the area with the clock ringed by goat's heads

Mog also has a Triple Triad card, separate from Madeen's. It is only won from the Rare Phantom in Memoria. 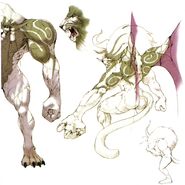 Madeen's name sounds similar to the Final Fantasy VI esper Maduin, but they don't have the same name even in Japanese. Madeen's name may be related to the summoners' village of Madain Sari.

Madeen's attack is Terra Homing. [view · edit · purge]"Terra" is the Latin word for "Earth". It is also present in some Latin-derived languages such as Italian and Portuguese. Terra is also a name of a parallel world in Final Fantasy IX.