Zidane! This is my home: Madain Sari, the village of summoners!

Madain Sari is a location in the northern region of the Outer Continent in Final Fantasy IX. It is a ruined village, where a tribe of summoners once lived. Despite being populated with moogles, Madain Sari is the only town/village in which there is no moogle save point.

According to Final Fantasy IX Ultimania, Madain Sari is located where the pulse of the planet Gaia runs its most focused, and the people of Madain Sari studied the workings of nature and use of summoning magic. From their discoveries, they theorized that the eidolons are Gaia's guardians manifested from the collected belief in myths and legends accumulated within the planet's crystal. The Eidolon Wall, with the many engravings of eidolons, still survives to this day.

The summoner tribe used to inhabit the Mist Continent but, after the events 500 years prior to the game's start, when Alexander was summoned and the summoners failed to control it resulting in a rampage, the summoners looked for another place to live.

Alexander's crystal was broken into four fragments, one piece given to each of the kingdoms on Mist Continent, and the summoner tribe kept the last piece. According to the Final Fantasy IX Ultimania[1], Madain Sari is the place where the planet's pulse concentrates and was the reason the summoners decided to make their village there.

In time, the people of the Mist Continent forgot about the summoners and the eidolons, which became subjects of myths and fairytale. The summoners continued to live peacefully in their village, far away from the rest of civilization.

Ten years prior to the game's start, Garland ordered Kuja to destroy Madain Sari because he feared the tribe's power of summoning eidolons could come between him and his plans. During the village's destruction, Garnet and her biological mother escaped, but her mother died upon reaching Alexandria and Garnet was raised a princess never knowing of her roots as a summoner.

Madain Sari and its civilization were largely destroyed and only a few survivors remained. Eiko was the last child to be born but, as her parents died soon afterwards, she was raised by her grandfather who died one year before the game's start. Since then, Eiko has been living in Madain Sari with only her moogle friends to keep her company.

The party arrives at Madain Sari after passing through the Conde Petie Mountain Path. After revealing that Madain Sari is the village of the summoner tribe, Eiko becomes interested in knowing more about Zidane and assaults him with personal questions. She is going to cook dinner and the party is invited. Zidane, curious about Eiko being a summoner, tells Garnet they should accept Eiko's invitation and she unenthusiastically agrees. Eiko leaves the party and they all go their own way to explore the village.

While waiting for Eiko, Zidane and Garnet are taken by the moogle Morrison to see the Eidolon Wall. This upsets the moogle Moco, who up until then had been the Wall's guardian. Within the Eidolon Wall, Morrison explains what they see is a collection of paintings of the eidolons the summoner tribe found during their research. Garnet becomes depressed, thinking about having had her eidolons extracted from her, but Zidane reassures her she will get them back. She tells him she wants to look at the murals for a while longer and he leaves her to it.

Eiko finishes cooking dinner (which can be seen in a series of ATEs) and everyone gathers to share the meal. During dinner, Zidane asks Eiko where the other summoners are and she reveals she is the only survivor. After the meal, Eiko asks for Zidane's help in the kitchen. He tells her they want to go to the Iifa Tree, to which Eiko replies that it's impossible due to it being sealed with an eidolon. Zidane requests she break the seal but she refuses.

That night, seeing that Vivi is troubled with his thoughts, Zidane consoles him and they engage in "an age-old ritual between male friends", which consists of urinating together outside. Eiko, who had been listening in from her kitchen, decides Zidane is "the right man" for her and that she will accompany him on his journey.

The next morning Garnet wishes to return to Madain Sari, as she is no longer scared of the Eidolon Wall. Before they leave, Eiko joins the party stating that they need a summoner, such as herself, to break the seal.

Once the party defeats SoulCage at the center of the Iifa Tree clearing the Mist, Moco arrives to alert Eiko of a precious jewel stolen from Madain Sari. The party follows Eiko and discovers the bounty hunter Lani has entered the village and taken the stone. Eiko attempts to take it back but is taken hostage. Zidane attempts to save Eiko, but another bounty hunter, Red, dispatches Lani. Red challenges Zidane to a duel, and Zidane defeats Red but spares his life, inviting him to help in their quest instead. Red reintroduces himself as the Flaming Amarant.

Eiko resolves to follow the party, breaking her promise to her grandfather not to leave the village before her sixteenth birthday. Garnet sings her song when memories of Madain Sari flash by her eyes and recovers memories of her life in Madain Sari. She decides to continue the heritage of the summoner tribe along with Eiko. The party continues their quest towards Iifa Tree to find Kuja.

After being defeated by Zidane, Amarant will join the party here. Later, the moogle Morrison can be found selling items.

Right before Zidane's fight with Amarant, one of the moogles will offer to heal Zidane's HP and MP.

A circular chamber filled with paintings of the eidolons, being a sacred place where the summoners realized many rituals. Zidane fights Amarant here.

After the summoning of Alexander in Alexandria, the party can visit Madain Sari and read the scriptures in the wall, telling part of the story about the summoners tribe demise.

We repeated the mistake our ancestors made 500 years ago.
We failed an attempted summon at the foot of the Iifa Tree. The area surrounding the tree was unaffected, but we sealed the area as they would have done 500 years ago.

When the arrogant one summoned a power that could not be controlled, holy judgement was passed.
The Jewel of this village must serve as a reminder of the day we had to leave our country

Also a dining room, it is where Zidane and the party eat Eiko's special meal. Later, the moogle Momatose can be found here, and will offer the party a rest.

Eiko and her moogles will prepare a meal for Zidane and the party. If the player watches all the ATEs and pick the right choices, Quina will help Eiko out and the meal will be a success. Later, the moogle Chimomo and Lani (who was rescued by the moogles) will be found here.

The storage room where Eiko's jewel was hidden, by order of her grandfather. Later, the moogle Mocha will stay here.

One of the rare coffees, the Kirman Coffee, is found in Eiko's kitchen.

During the party's first visit to Madain Sari, Eiko prepares a meal of rock-fisted potato stew and barbecued fish. She assigns the tasks of fishing, digging for potatoes, and helping her in the kitchen to three of her moogle friends. While fishing, one of the moogles catches Quina, who had taken the bait instead. Quina offers to help Eiko with her cooking and, depending on the player's choices, the dinner will either be a success or a disaster.

The better the food is, the longer the dinnertime conversation will be. If the meal turns out excellently, Eiko will explain how summoners communicate with eidolons through their horns.

Princess Garnet's true name is engraved on the Eidolon Wall at Madain Sari. There is a way to reveal the truth after the party has the Invincible airship in endgame.

The player must form a party with Garnet and visit Lani, who is standing on Eiko's back porch. Upon arriving, Lani will run away. The player should exit the village and return with anyone except Garnet or Amarant, then talk to Lani twice. A message will lead the player to the Eidolon Wall where the player should walk clockwise from the entrance (heading to the right) until they complete a full circuit of the wall.

The inscriptions on the murals must be read and it is possible to do it in any order. Extra messages will appear this time. Returning to the Ifrit drawing, an emotional message from Garnet's father to his daughter and his wife Jane is revealed. The message indicates that Garnet's true name is Sarah. In the latest versions, uncovering this secret earns the achievement/trophy Cracking the Code.

All items purchased from Morrison's Mogshop.

Madain Sari (Special).
Add a photo to this gallery

The conversation with Amarant changes slightly when he is confronting Zidane at the Eidolon Wall, based on whether the player read his wanted poster in Treno earlier. It doesn't matter if it was read as Steiner or as Zidane.

In Eiko's kitchen where Lani stays during the end game there is a moogle named Chimomo, and a pot of food. If the player plays a game of cards with Lani, upon exiting the card screen, the moogle will have grown in size, and the pot will have gotten smaller, signifying how the moogle ate the food while the player and Lani were busy playing cards.

Concept artwork of the boat from Madain Sari that Dagger and her mother used to escape.

Concept artwork of the fish Eiko cooks for her meal.

Madain Sari on the world map.

Entrance when Mist spreads across the world.

Town square when Mist spreads across the world.

Eiko's house when Mist spreads across the world.

Living room when Mist spreads across the world. 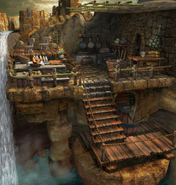 Kitchen when Mist spreads across the world.

Secret room when Mist spreads across the world.

Path to Eidolon Wall when Mist spreads across the world.

Eidolon Wall when Mist spreads across the world. 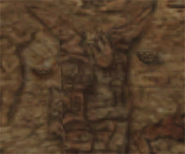 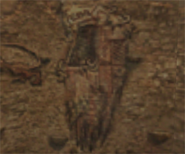 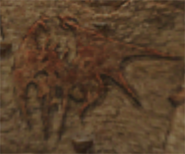 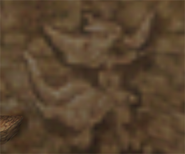 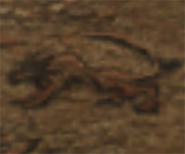 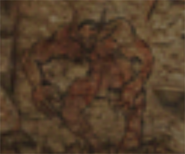 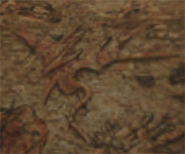 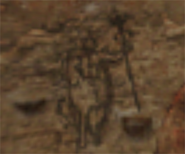 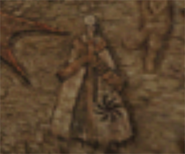 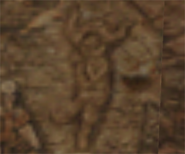 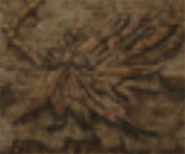 Zidane and Garnet in a boat in Madain Sari.
Add a photo to this gallery

Madain Sari is likely adapted from "Mada'in Saleh". [view · edit · purge]Mada'in Saleh is an ancient city located in the north of Saudi Arabia said to have been cursed and destroyed by a cataclysmic earthquake as a punishment by Allah for the Thamudis' idol worship. Madain Sari's remaining architecture is also reminiscent of that of Mada'in Saleh.

In the localized versions, the summons are named "eidolons", which relates to the term "idol" as well. [view · edit · purge]Eidolon means "unsubstantial image," "reflection," or "phantom" in Greek. It can also mean "idol" and is the source of the Latin word "Idolum."