Machinist is a job in Final Fantasy XIV, introduced in the game's first expansion pack, Final Fantasy XIV: Heavensward. As with the other three Ishgard jobs, Machinist has no base class and begins at level 30.

The war with Dravania rages on. Brutal and unrelenting. With no end in sight, the Holy See grows desperate. As her dragoons lay down their lives in defense of their home, Ishgard turns to technology to protect her sons and daughters. Great cannons and ballistae now line the city walls, plucking dragons from the sky.

Following the example of Cid Garlond, who has demonstrated the potency of magitek, the Skysteel Manufactory works tirelessly on the development of advanced armaments. As new and devastating weapons are brought to the fray, a new class of champion arises to wield them ― the machinist.

The job is a mobile, ranged DPS class using guns as their main weapon. Machinists focus on dealing ranged damage using a combination of firearms enhanced with various attachments and can deploy mechanical turrets to help them on the battlefield.

Through the centuries of lshgard's endless conflict with the Dravanians, the city-state's engineers have devised and improved upon myriad dragon-killing contrivances. This inspired the construction of the Skysteel Manufactory in the year 1483 of the Sixth Astral Era, where resident artisans to this day continue to invent weapons such as the ceruleum-propelled giant ballista, and the quad-barreled Bertha cannon. Many of these modern advances can be attributed to Stephanivien de Haillenarte, the manufactory's brilliant chief, who has welcomed the assistance of Garlond Ironworks with incorporating imperial magitek into traditional Ishgardian craftmanship.

Stephanivien's primary achievement has been the creation of the aetherotransformer- a device which converts the wearer's innate mana into the lightning-aspected energy suited for powering the chief's revolutionary inventions. In addition to instructing volunteers in the use of the transformer, Stephanivien has employed a master of marksmanship from Limsa Lominsa to train an ever-growing number of recruits. Armed with their signature firearms and a repertoire of technological marvels, these soldiers of a new age are known as Machinists.

Machinists wield guns as their weapons. Their armor is primarily made up of "Aiming" gear, light armor with average defenses that they share with other ranged physical DPS classes.

The primary attribute for machinists is dexterity, which boosts their attack power, and should always be prioritized over other attributes. As a DPS discipline, they draw the most benefit from the critical hit, direct hit, skill speed, and determination secondary attributes, which all improve their damage dealing capabilities in some way.

The Job Gauge was introduced to players in 4.0 Stormblood. Currently, the Machinist uses the Heat Gauge and the Battery Gauge.

The Heat Gauge─indicating a firearm's temperature─is displayed upon execution weaponskills. Using Hypercharge allows the use of additional skills at the cost of the Heat Gauge, requiring no cooldown or cast down.

In Shadowbringers 5.0, the Machinist was heavily reworked, removing the Overheat, Gauss Barrel and Ammunition mechanics entirely. The Split Shot combo becomes permanently heated after learning the corresponding traits. Now, the Battery Gauge fills up when completing the Split Shot combo and is used to summon the Rook and Bishop Autoturrets as well as the Automaton Queen learned at Level 80. They remain on the field until the gauge depletes.

The following actions and information has been removed.

The Ammunition Gauge was introduced in Stormblood patch 4.0 and removed in Shadowbringers patch 5.0.

While the Heat Gauge remains in game after Shadowbringers patch 5.0, it has been heavily reworked from its previous incarnation. When the Heat Gauge reached 100, the firearm became overheated. While overheated, firearms would deal additional damage, but soon become too hot to use. At this time, the Gauss Barrel was automatically removed and could not until it cools.

Machinists' Limit Breaks focus dealing powerful damage to enemies in a straight line in front of the player. Machinist shares the same Level 1 and Level 2 limit breaks as Bard.

This gallery is incomplete and requires Blank added. You can help the Final Fantasy Wiki by uploading images.

Machinists may be a re-imagining of the Musketeer class. Musketeer was a gun-wielding class planned in the early stages of the original game, but never made it past the alpha stage. Despite this, musketeers retain a presence in-game, particularly in Limsa Lominsa. The Musketeer's Guild shares its headquarters with the Yellowjackets and Marauder's Guild, and several gun using characters that are not strictly machinists appear throughout the game, using many of the same animations. It's possible that had the Musketeer class made it into the game that it would served as the base class to the Machinist job like the other original classes serve as bases to their respective jobs. 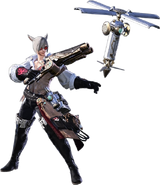 Machinist in the benchmark video.

Machinist in the benchmark video.

This gallery is incomplete and requires screenshots of abilities added. You can help the Final Fantasy Wiki by uploading images.