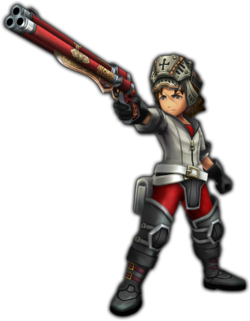 Machinists use guns for long-range attacks, inflicting status effects on the enemy and enhancing their own combat power.

Machinist (機工士, Kikoushi?) is a job in Final Fantasy Explorers.

The Machinist is unlocked after obtaining over 130,000 CP. It can be mastered by completing any 10 quests, then the 5★ quest "Mastery Trials: Machinist".

Machinist is a versatile, long-range damage dealer. They can initially equip firearms, artillery and knuckles; after mastery dual firearms and spears can be equipped.

They are proficient in all Firearm Skills and Artillery Skills.

The unique ability Drive reduces the AP cost and cooldown of all abilities. The standard ability Ingenuity increases the stat boosts and duration of Trances.