The Machine Gun (マシンガン, Mashin Gan?), also known as SMG (サブマシンガン, Sabumashingan?), is a recurring weapon in the Final Fantasy series. It often appears as a stand-alone weapon, but is also the signature weapon of Laguna Loire.

The Machine Gun is Laguna's weapon, used by him in dream sequences. It has an attack power of 14 and hit rate of 103. It is a long range weapon, and is used in his Limit Break, Desperado.

Gadot wields a machine gun when he is a guest party member early in the game.

Rapidus SMG is a weapon for Prompto used when character-swapping and in his downloadable episode. In his episode, the player must acquire the weapon from defeated enemies or find it from the environment, and after it runs out of ammo the player must procure another one. In the main game, it is always available in the weapon wheel, but after it runs of out ammo, it takes a moment to "recharge". The Windows and Royal Editions have an accessory for Prompto that gives his machine gun infinite ammo: The Clever's Talisman.

The SMG has 100 bullets and is aimed and fired in a first-person perspective with the same buttons as the handgun, and it does not lock onto targets. While aiming, Prompto can quickly sidestep a short distance in any direction with the dodge button. Upon fully consuming it, Prompto must wait 15 seconds for it to recharge, and it will only recharge during battle and while he is being controlled. It does not gain his equipped handgun's passive effects and suffers a damage penalty when shooting from further away. Its damage scales with Prompto's Strength stat and the shots will spread after 10 consecutive shots are fired, and will spread even further after 30 consecutive shots.

In addition, Prompto can use the Flagrum SMG during his episode while riding on a snowmobile. The Flagrum SMG has infinite ammunition, locks on to targets, and almost always hits, though its damage is significantly lower.

SMG can be bought in Port Town for 400 GP. It has 20 uses and an attack power of 50, the damage formula for SMG is base on Strength and Agility.

The SMG (acronym for Submachine Gun) is a gun-type weapon bought for 6800 GP in Second Town and Giant's Town. It has 30 uses, and also increases a Robot's HP by 45. The damage formula for SMG is equal to 250 points of damage. The gun is Long Range, attacks one group, and never misses.

The SMG has an attack power of 40 and can be bought for 3400 G at Muu or Viper City in the Future. It can also be found in the Northern Ruins on Floatland.

The Machine Gun is the weapon of the machine set, usable by purchasing the Use Machine ability for a character. It is a level 96 weapon that lowers HP by 307, grants +67 ATK and +81 Bravery. It also increases Wall Rush Bravery damage by 30%, but increases the break chance for breakable accessories by 5%.

The Machine Gun is used by Laguna in battle, and shares its name with one of his Bravery attacks where he bombards opponents with a barrage of gunfire. The Machine Gun is also used in Chase Sequences and his Desperado EX Burst.

The Machine Gun is also a level 30 weapon exclusive to Laguna. It lowers his HP by 377 and his Defense by 2, but increases Attack by 40 and Bravery by 83. It also grants a boost of 10% to Laguna's Physical Defense. It can be obtained by trading Vega, a Scarletite, Gunner's Desire x5, and 61,000 gil.

Laguna wields the Machine Gun in his character model.

A machine gun from a distant world. It is characterized by its extremely high rapid-fire ability. In its world of origin, it is said to have been wielded by a man who was a soldier in the army of the powerful military nation of Galbadia. Even after he retired from the army due to a serious injury he sustained on a mission, he is believed to have continued using this machine gun.

Machine Gun (FFVIII) is a Gun obtained as the Super Trust Master reward from Laguna. It provides 220 ATK, +100% Limit Burst damage, 100% extra physical and magic damage against dragons, has a damage range of 135-17%, +70% accuracy, and requires both hands to wield. When equipped by Laguna, it also provides 500 ATK. 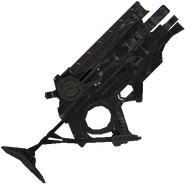 The SMG's artwork in The Final Fantasy Legend. 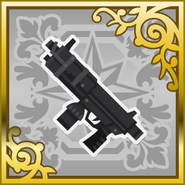 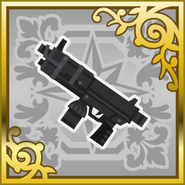 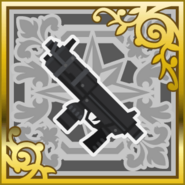 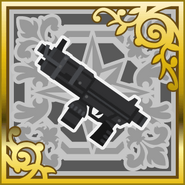