The Machina Striker is an enemy in Final Fantasy X-2.

"An ancient Machina that has been wandering for over a thousand years. It seems many were produced, but no one knows their original function."

Using Ice attacks brings it down quickly, so attacks such as Blizzaga and Ice Brand inflict the most damage to it. It is also wise to have some status resistance to Sleep, Blind and Silence.

Machina Striker can be fought as The Team 'No Limit'. The player who seeks to upgrade their captured fiends would found the great use of fighting Machina Striker. Apart from its high EXP yield upon defeated, The Machina also has rare offensive item called L-Bomb to be stolen and 3 as a common drop. Consume 10 L-Bombs will teach Fireworks. One of the most powerful ablities in the game.

To enter the Aeon Cup in the Fiend Arena, the player must capture and raise the story levels of eight special creatures. These creatures will immediately be available to be released upon capture, however, what the player has to do is raise their story levels by three and then release them. This will change that particular creature into an aeon. The Machina Striker is one of these eight creatures; capable of being changed into Ixion. 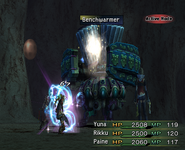 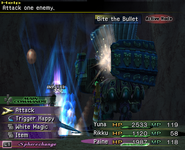 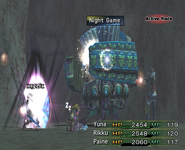 Night Game.
Add a photo to this gallery

[view · edit · purge]Machina is the Latin word for "machine."

Retrieved from "https://finalfantasy.fandom.com/wiki/Machina_Striker?oldid=3293578"
Community content is available under CC-BY-SA unless otherwise noted.