The Machina Panzer is a boss in Final Fantasy X-2 fought in the cave in the Thunder Plains in Chapter 5 and in the Fiend Arena anytime during the game. It uses Crawler's model from Final Fantasy X.

"An ancient war Machina. It was apparently programmed to scour Spira for Combat Data so that it could learn to counter any Attack/None."

Machina Panzer fights alongside the three watchers (Watcher-A, Watcher-S, and Watcher-R). It is advised to destroy the Watchers as quickly as possible to avoid having abilities locked.

The Machina Panzer itself is a strong enemy, but using Protect will go a long way in reducing the damage it can do. It is good to keep several Mega-Potions and Phoenix Downs on hand for the times a party member is KO'd, as its Sorcery Beam is extremely powerful. High-powered attacks such as Excalibur, Fireworks, and Black Sky bring it down quickly.

The Machina Panzer comes with Ailment Def., Lightning Eater, and Total Limit Break already learned, and it also retains its moves from its boss battle, making it a powerful ally early on in the game. However, it has an absurdly small MP pool, making magic unadvisable.

In the Fiend Arena, Machina Panzer is first encountered in Standard Cup: Hard via the No Mercy team. Unlike in the New Cave, the Machina Panzer is always fought alone and can be fought at any time. It is useful for farming Crystal Bangles, Oath Veils, and gil as it drops 10,000 gil when defeated (if all three party members either have Gillionaire or wear the Key to Success accessory, the gil earned becomes 80,000). 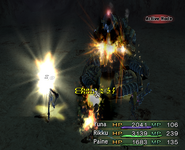 "Machina" is a type of previously forbidden technology in the world of Spira. [view · edit · purge]Machina is the Latin word for "machine".

[view · edit · purge]Panzer means "armor" in German. It is also the German abbreviation for "tank".