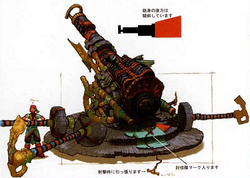 Long time ago, there were a whole lot of cities in Spira. Big cities with machina -machines- to run 'em. People played all day and let the machina do the work.

Machina (FFX Original: 機械, Kikai?; FFXInt, FFX-2: マキナ, Makina?) is the term used for powered machines in Final Fantasy X and Final Fantasy X-2. Machina technology used to be common all across Spira, but after the advent of Yevon faith fell out of favor, only the Al Bhed kept on using it openly.

Machina was invented over 3000 years ago and became powerful enough to surpass magic.[1] According to the Final Fantasy X Scenario Ultimania,[2]the first development in Spira was brought about by the power of magic. The use of magic depended on individual factors and those who could use magic naturally had an advantage, while those who couldn't were discriminated against. Thus the age of the magic civilizations was an age of inequality.

When machina was invented it was revolutionary and did away with the inequalities and spread throughout Spira. Machina developed quickly, and things once thought impossible became an aspect of everyday life. The endless supply of electricity made "cities that never slept" a reality. Machina was supposed to be an alternative for those who couldn't use magic, but when it surpassed it new problems arose. Some nations possessed outstanding machina technology, while others didn't, and a new age of inequality began.

As told in Final Fantasy X-2.5 ~Eien no Daishou~, there was once a mechanic called Alb who created a race called Bedohls, humans who could not use magic but excelled at wielding machina, and used them to combat a mage from Zanarkand. The term "Al Bhed" is a corruption of "Alb" and "Bedohls". Their weapons were so powerful they were kept under surveillance at all times. It is speculated their power was the catalyst for the Machina War.

When the Machina War broke out between Bevelle and Zanarkand, Bevelle using mainly machina for weapons while Zanarkand depended upon its summoners, Zanarkand was left devastated. Bevelle built the machina weapon of unspeakable power, Vegnagun, but deemed it too dangerous for ever to be used and it was sealed in Bevelle Underground.[3] Near the end of the war Bevelle's superior machina gave them the upper hand and Zanarkand was about to lose. Zanarkand's survivors were made into fayth by the summoner Yu Yevon for a mass summoning.

To protect himself amid the summoning, Yu Yevon gathered millions of stray pyreflies around himself, forming an armor which would later became known as Sin. Not to become distracted from his summoning, Yevon "programmed" a series of guiding instincts into Sin: among them, to attack any larger human settlement, to attack any machina, and to respond to aggression with overwhelming force. Yu Yevon lost control of Sin and became trapped inside its instinctive behavior, from then on living only to summon. The out of control Sin attacked the nearest human settlement, destroying the real Zanarkand, and proceeded to decimate the incoming Bevellian army.

From that point onwards Sin destroyed machina cities, becoming a terror to all Spirans and uniting Spira under a common fear. The citizens of Bevelle at that time thought that what Yevon had summoned from the Zanarkand fayth was Sin that was going around destroying everything as a sign of Yevon's anger.

Yu Yevon's surviving daughter, Yunalesca, made her husband Zaon into a fayth for the Final Summoning and defeated Sin. The moment Sin's shell was cracked Yu Yevon possessed Zaon's aeon, and began building a new Sin around it.

With Sin's "defeat", a short period of peace settled on Spira, known as the first Calm, and the survivors began reconstructing Spira, focusing on Bevelle. Yu Yevon regenerated Sin using Zaon's aeon as a core, and the new Sin destroyed the remaining machina civilizations and thus machina use began to fall out of favor. The Yevon Temple was established in Bevelle and the teachings of paying homage to Yevon and Yunalesca, and preaching of machina prohibition, were adopted by the world at large.[2] The new religion established Sin as a punishment for people's sins, spreading the story that the Calm will arrive with the Final Summoning. After the Temple of Yevon was established the Al Bhed were blamed for the emergence of Sin and executed in numbers, thereby casting them out of society.

Yevon forbids machina use due to its potentially destructive nature, save for a few exceptions (such as the blitzball sphere pool). The Al Bhed continue to be considered heretics for their rebellion against Yevon's doctrine, as well as their salvage and use of ancient machina. Bevelle shows its duplicitous nature in its own secret machina use, knowing of Sin's true origin and that it cannot be banished by the Final Summoning. The Bevelle Temple is full of machina, and the armies of Bevelle wield machina weapons.

By Final Fantasy X-2, machina has come into wider use due to the fall of Yevon as the main political force, although many are uncomfortable with its use. As a result, newly built machina are branded "machines". Al Bhed are no longer viewed as heretics, and with the use of machines spreading through Spira hovers replace chocobos at Mi'ihen Highroad.

Some of the more known machina seen Spira are:

In Final Fantasy X, using the Steal command on any "Mech" enemies will instantly defeat them.

Some machina appear as enemies.

[view · edit · purge]Machina is the Latin word for "machine". In the English localization, "machina" is pronounced [ˈmɑː.ki.nə].